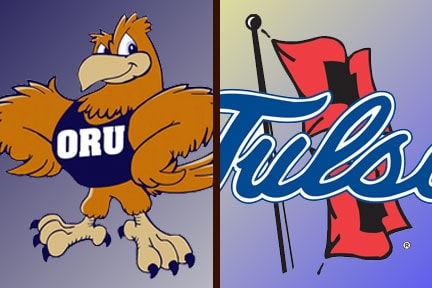 TULSA, Okla. – Oral Roberts University rallied from a two-set deficit but fell to the University of Tulsa, 3-2, in a classic crosstown rivalry showdown on Tuesday night at the Reynolds Center. The loss drops ORU to 3-1 on the season.

On the defensive end, Bruna Silva tallied 20 digs, with Laura Taylor and Kylie Johnson providing 12 each. Taylor added a team-high 26 assists, giving her ORU’s first double-double of the season.

Schaffner and freshman Nika Mostahinic each provided a spark after not playing in the opening set. The rookie had a nice night, with six kills, nine digs and three service aces.

The Golden Hurricane hit .152 as a team.

The setback is ORU’s sixth straight to Tulsa, with the last three coming in five sets.

ORU scored the first two points of the match but fell behind quickly in the opening set. Back-to-back Culbertson blocks gave TU a 12-5 lead, forcing a timeout. The stoppage did little to slow Tulsa’s momentum, however; the Golden Hurricane scored the final three points of the set, capped by a pair of ORU attack errors, to take a 25-14 victory.

The home team continued to control the match at the outset of the 2nd set. Tulsa scored eight of the set’s first nine points, finished off by consecutive ORU errors, and eventually built a 16-2 lead. The Golden Eagles tried to rally, but Tulsa took the set, 25-9.

Down 13-7 in the 3rd set, ORU called another timeout to try and reclaim momentum. It worked, sparking an 8-3 Golden Eagle rally, capped by a Qualls kill that cut the gap to 16-15.

ORU finally tied it up one point later on a Tulsa error and took their first significant lead of the match at 17-16 on a Mostahinic kill. Later, the Croatian freshman prompted another Tulsa timeout, slotting a kill inside the sideline to give ORU a 20-17 edge. TU retook the lead briefly before the Golden Eagles scored the final three points of the set for a 25-23 victory. Schaffner and Jovana Poljasevic combined for a block on the clinching point.

The ORU surge carried over to the 4th set, with Schaffner blasting consecutive kills that gave the Golden Eagles a 7-1 lead. The home team tried to rally, but five straight ORU points pushed the lead to 20-14. The advantage held, and a Tulsa service error forced a 5th set with ORU winning, 25-22.

The Golden Eagles fell behind early in the 5th set before a four-point run gave the visitors a 6-5 lead. After Tulsa tied it up, a Taylor kill pushed the advantage back to ORU, at 10-9.

The lead was 13-12 for ORU when Tulsa regained control. A Bohannon kill tied the set, and an ORU error gave the Hurricane a match point. The Golden Eagles fought it off, but two points later Tulsa secured a 16-14 clinching victory on an ORU attacking miscue.

ORU gets back on the court this weekend, at the El Paso Sports Commission Volleyball Invitational in El Paso, Texas. The Golden Eagles open the match against Texas Southern, with first serve on Friday scheduled for 10 am MT.