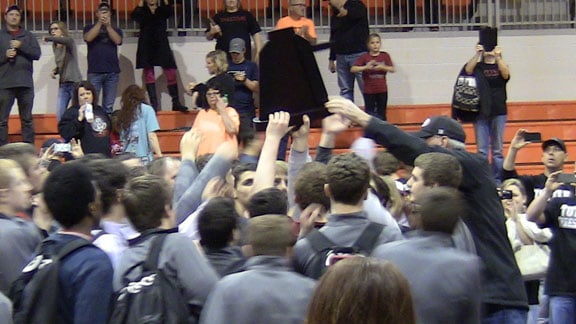 The drama at the 2015 Class 4A State Dual Wrestling Tournament was not really which team would win this year. It was more about which team would make it through the other side of the bracket to get to face Tuttle in the championship on Saturday in Cushing.

For their part, the Tigers certainly didn’t disappoint, cruising through the first two rounds and capping the day with a 69-6 victory over Clinton in the championship. It is the sixth straight title for the Tigers in Class 4A.

Tuttle (17-1) was the No. 1 team in 4A in duals coming into the tournament. And although the streak of state championships continues to grow, coach Matt Surber doesn’t use that as motivation for his squad.

“To be fair to these kids, we don’t talk about each year continuing it on,” Surber said. “We don’t mention it a whole lot. I mean, people are aware of it. A whole lot of work goes into it each year. The kids come back every year ready to work.

“Today, we only lost a few matches and it’s a tribute to them working hard. We’ve got a great coaching staff here and a good community that supports wrestling and all of it, all of the moving parts, equate to that success.”

The Tigers dismantled Mannford, 74-4, in the quarterfinals and took down Vinita, 57-12, in the semis.

In the final against Clinton, Tuttle won 13 of the 14 weights. The round began at 106 and that worked well for Surber.

“There’s been a few years that we didn’t have that and it’s been like, ‘Oh ok, when are you going to win?” So having a good 106-pounder is really key and we’re really solid from 106 to 160 and that’s the heart of our team. They built a big lead in all three duals today. We’re not as good in the bigger weights, but we find a way just keep scrapping and it led to a dominant performance.”

Surber gave credit to the seniors in the group, and said he knows there is also much potential ahead.

“We’ve got three seniors, and leading the way is Dustin Mason. He’s a two-time state champion. He’s a great leader for us. And we’ve got two other seniors at 170 and 182 that work their butts off as well.

“But we’re really a junior-laden team, so next year the cupboard’s not going to be bare and if the kids come back with the right attitude and mindset to keep working and improving, the sky’s the limit for next year.

Clinton finished the season at 17-3 in duals and the Red Tornadoes’ appearance in the championship round was the first in school history.

And now Tuttle’s attention focuses on Clinton again as one of the two sites for the 4A regional tournament. Surber said his team is pushing to qualify the maximum number to the state level.

“Our goal is to always take all 14 and we’ve got a good kid at every weight. Now to get into the top four is a different story, but the goal is to get all 14.

With as dominating a performance as was on display on Saturday, that goal doesn’t seem far-fetched at all.