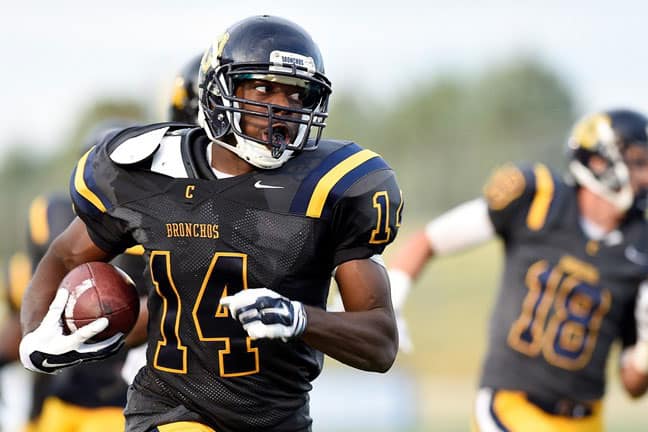 Another win, another strong defensive performance for the Central Bronchos on Saturday.

UCO defeated Emporia State, 24-14, and upped its record to 3-0, the first time the Bronchos have seen that mark in a decade.

It was the defense that stepped up big again.  And while Bronchos coach Nick Bobeck said he was pleased with the effort, he spoke also of getting better.

“They played well and we tackled pretty good for most of the game,” Bobeck said.  “There were a couple of explosive plays that we had that we didn’t tackle very well on and had multiple missed tackles.  But our coaches on the defensive side of the ball put together a great plan and shut down an extremely potent offense all the way through three quarters.”

UCO took a 17-7 lead into the fourth quarter and upped it to 24-7 midway through the period.  The only Hornet score to that point came on a punt return early in the game.

“In the fourth quarter, the score they had, came off a turnover and they went down and scored on us.  It was a great plan and it was well executed by our players.”

The Bronchos gave up 385 yards of total offense, but came up big when they needed to, stopping ESU drives twice that made it close the UCO goal.

“Our kids kept playing the game,” Bobeck said.  “Both of those times they got down inside the 10-yard-line were coming off explosive football plays that we really essentially had screwed it up on the defensive side of the ball.  But the kids kept playing and found a way to make a play on both occasions and came up with big turnovers.”

One of those stops led directly to points for the Bronchos, as junior Levonte Douglas picked up a fumble at the UCO 1-yard-line and returned it 99 yards for the score.

“That’s just what good football teams do – they find a way to continue to play,” Bobeck said.  “We talk about it all the time.  It’s not necessarily what happens to you, it’s how you react.  And our kids are reacting in a positive manner right now.”

But the Bronchos’ work continues as now they must prepare for the No. 1 team in the country.

Central hosts the top-ranked defending national champion Northwest Missouri this weekend.  Bobeck didn’t downplay his opponent, but rather played up the opportunity before his team.

“Northwest is just a good football team.  There’s no question about that; they have been for a long time.”

“The goal that we have here at UCO is to win a national championship. That’s the team goal and that’s the only goal we’ve had since we’ve been here.

“You get opportunities to play against some of the best competition in the country in our league.  And you have to take advantage when those opportunities arise.”

The Bearcats rank third in the country in total defense, giving up only 179 yards per game.

Standout UCO receiver Marquez Clark was sidelined last week against Emporia State, but may be back this weekend this give the NWMSU defense more to deal with.

“We’ll see on Marquez,” Bobeck said.  “We think he’s going to be ready to go.  But only time will tell.  You never know with ankles and such, especially with speed kids.  That stuff affects them just a little different.”

This is one of those games likely circled on the calendar since the spring.  This is contest in which a team can make a statement.

Game time is set for Saturday at 1 p.m. at Wantland Stadium.