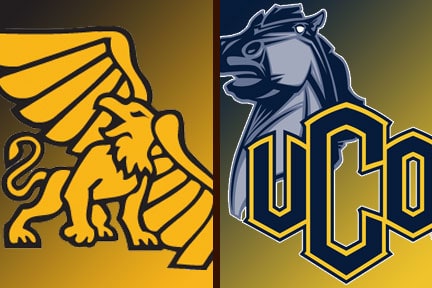 EDMOND – Balls flew out of wind-blown Wendell Simmons Field at an amazing pace Saturday afternoon when Central Oklahoma and Missouri Western waged a thrilling back-and-forth offensive showdown that ended in a second straight one-run loss for the Bronchos.

The Griffons prevailed 22-21, with the two teams combining for 39 hits – including 14 home runs – in in an extra-inning slugfest that took more than four hours to complete and saw 17 pitchers throw a combined 476 pitches.

Landon Eason blasted three of UCO’s eight homers, while MWSU had three players club two long balls apiece.  The Bronchos scored 10 unanswered runs in overcoming a five-run deficit to take an 18-13 lead into the ninth inning only to give up eight runs in the top of the ninth in falling behind 21-18.

UCO hit two homers in its final at bat to pull even at 21-all before the Griffons scored once in the top of the 10th to pull out their 11th consecutive road victory.  The two teams end the series at noon Sunday.

“Another tough loss in a game we thought we had control of,” said head coach John Martin, whose team gave up a six-run lead Friday.  “I was really proud of the way we came back to get the lead and again after we gave it up in the ninth, but we just didn’t do what we needed to at the end.”

The Bronchos appeared out of the game after falling behind 13-8 through six innings, but Chris Lobato came through with a two-out, two-run single in the seventh and then UCO took the lead with an eight-run explosion in the eighth.

Eason led off the eighth with a walk and went to third on Kamies’ double before going home on a wild pitch to start the scoring parade.

Borrego and Hellbusch drew consecutive walks to load the bases and UCO tied it on a one-out error that scored two runs.  Smith was intentionally walked to fill the bases again and after a pop-up Dyer came delivered a three-run double down the left-field line.

Eason capped the inning with his third dinger of the game, this one a two-run blast to left-center field to put the Bronchos on top 18-13.

But, like in Friday’s series opener, it wasn’t enough.

The Griffons led off the ninth with back-to-back singles and sent 12 batters to the plate, taking advantage of three walks and a hit batter while also belting their sixth homer of the game in equaling UCO’s eight-run inning to regain the lead at 21-18.

And again the Bronchos rallied.

Borrego led off the bottom of the ninth with a bloop single and Brenton Washausen gave UCO life with a two-run blast to left field one out later.  Sparr tied it on the next pitch with a big bomb to left, but Kamies’ hard-hit liner to center was caught for the final out with the bases juiced.

MWSU then led off the 10th with a pair of hits to regain the lead 22-21 and this time the Bronchos couldn’t answer.

The Griffons broke on top early with two unearned runs in the top of the first, but UCO answered back quickly on Eason’s first homer – a two-run line drive that just cleared the fence in right-center field – and Hellbusch’s moon ball to left in taking a 3-2 lead.

The teams traded solo homers in the second, with Smith belting a lead-off shot to right field to keep UCO in front 4-3, before the Griffons pushed across four runs in the top of the third to go ahead 7-4.

Kamies led off the bottom of the third with a no-doubt bomb to straightaway center field and Borrego followed with a double off the wall before scoring on back-to-back wild pitches to pull the Bronchos within 7-6.

MWSU came back with another four-run volley in the fourth to increase its lead to 11-6 and Eason got two of those back with his second dinger of the contest, this one a deep drive to right field after Smith had drawn a lead-off walk.

The Griffons added a pair of solo homers in the sixth to make it 13-8.