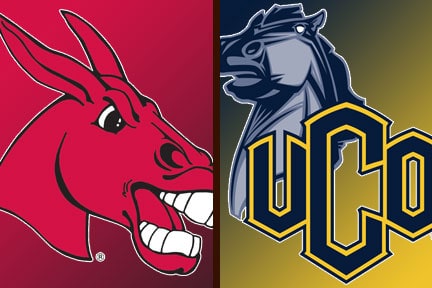 The Bronchos lost fumbles at the UCM 10- and 25-yard lines in the first half and the Mules used a long interception return to set up a short scoring drive in the fourth quarter in rallying for their fourth straight win.

UCO had a 35-26 lead early in the final period before the interception ignited a 19-point run that gave Central Missouri a 45-35 lead in the final minute.  The Bronchos added a last-second score to arrange the final margin.

“We did a lot of good things, but made too many mistakes and you can’t do that against good football teams,” head coach Nick Bobeck said.  “The turnovers obviously hurt us.  We had a great chance to win the game and just didn’t get it done.”

UCO, which fell to 2-5 on the season and in Mid-America Intercollegiate Athletics Association play, racked up 400 of their 644 total yards in the second half behind a big-play offense that had scoring plays of 49, 55, 59 and 71 yards.

It was the fourth-best offensive game in school history and the second straight 600-yard outing after the Bronchos went for 661 in last week’s 55-21 rout of Missouri Southern.

Quarterback T.J. Eckert hit 31-of-44 passes for 421 yards – the third-highest game at UCO – and four touchdowns while adding 26 yards rushing for 447 total yards, the second-best effort in school history.

Wide receiver Myles Tease had the best game of his career with eight catches for 155 yards and a score, with running back Clay McKenzie adding 114 yards and a TD in 21 rushing attempts.

The Bronchos finished with 223 yards on the ground against a UCM team that entered the contest giving up just 91.8.

The Mules gained 379 of their 570 total yards in the final two periods.

Fumbles halted two promising drives in the first half before the Bronchos finally broke the scoreless deadlock on McKenzie’s 24-yard scoring sprint midway through the second quarter.

Central Missouri tied it late in the quarter and then added a 32-yard field goal on the last play of the half to go ahead 10-7.

The Mules added a 31-yard field goal to open the third period for a 13-7 lead and then the fireworks really started as the teams traded touchdowns and the lead.

Tease took a short Eckert pass and turned it into a 71-yard touchdown to put UCO up 14-13, but Central Missouri answered back with a 75-yard drive to go ahead 19-14 as Dillon Rice blocked the extra point.

Another long scoring pass – this one a 55-yarder from Eckert to Josh Crockett as Tease made a key downfield block – gave the Bronchos a 21-19 advantage and again UCM answered.

The Mules used a 90-yard drive to move in front 26-21, but it took just one play for UCO to respond as Greg Johnson got to the corner and jetted 59 yards down the sideline for the TD that made it 28-26 with 3:09 still left in the third quarter.

The Bronchos finally forced a punt and hit another big play when McKenzie took a screen pass from Eckert and maneuvered his way 49 yards to paydirt to push UCO’s lead to 35-26 early in the final period.

The defense forced another punt, but this time Eckert was intercepted and UCM returned it 42 yards to the Broncho seven to set up a short scoring run that made it 35-33.

The Bronchos went nowhere on their next possession and a short punt led to a 43-yard TD drive that gave the Mules the lead at 39-35 with 7:38 remaining.

UCO embarked on a ground-oriented drive behind the hard-charging McKenzie to reach a first-and-10 at the Central Missouri 17 in the final minutes, but four plays netted just four yards and the Mules took over with 1:09 left.

UCM quarterback Garrett Fugate broke free for an 87-yard score on the next play to push the lead to 45-35, with the Bronchos adding a last-second score on Eckert’s 19-yard pass to Connor Pulley.

UCO is on the road for its next two games, going to Topeka, Kan. next Saturday to face Washburn.