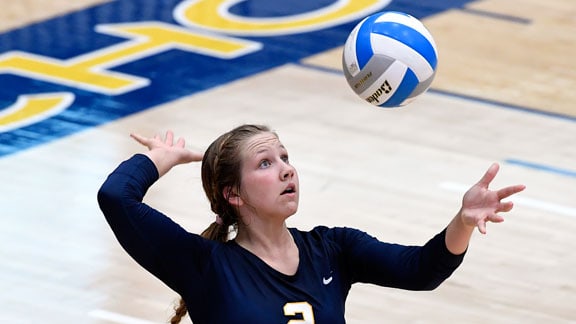 EDMOND – Hamilton Field House has been one scary place for Central Oklahoma opponents this season.

The No. 9-ranked Bronchos clobbered Lindenwood 25-17, 25-15, 25-19 on Senior Day Saturday afternoon to polish off a perfect 14-0 regular season home record, all of them three-set sweeps.  UCO improved to 25-2 overall and 11-2 in Mid-America Intercollegiate Athletics Association play with five league road matches remaining.

“One of our goals this year was to be unbeaten at home and that’s a great achievement, especially considering some of the teams we played,” said head coach Edgar Miraku, whose team has won 34 of its last 35 home matches.

“I’m really proud of our five seniors and the leadership they’ve given us this year.  They’re a special group and have really lifted our program.”

UCO’s seniors – Mikayla Bangasser, Allison Barr, Katy Davis, Fulani Petties and Bonnie Vernon – were honored in a pre-match ceremony and the Bronchos then proceeded to dismantle the Lions, never trailing in any of the three sets.

Sophomore standout Taylor Bevis hit a sizzling .522 with a match-high 13 kills against just one error in 23 attempts to lead UCO.  Petties hit .538 with eight kills and Barr had six kills with a .363 attack percentage.

The Bronchos jumped out to a 7-2 lead in the opening set before LU rallied to within 12-11.  A dump at the net by Davis, Barr’s solo block and a Bevis kill made it 15-11 and UCO pulled away from there.

Bevis hammered down consecutive kills and Bangasser followed with back-to-back service aces to get the Bronchos out in front 4-0 in the second set.  It was 19-15 when UCO scored the final six points on blocks, getting five assisted rejections from Spence and three from Alexis Washington during that span.

The Bronchos grabbed a 5-0 advantage in the third set and were up 17-8 after a Lindenwood error.  The Lions surged back, cutting the lead to 19-17 before a Washington kill stemmed the tide and Spence had two more blocks down the stretch to close it out.

UCO goes to Pittsburg State Tuesday to begin a five-match road-swing to end the regular season.