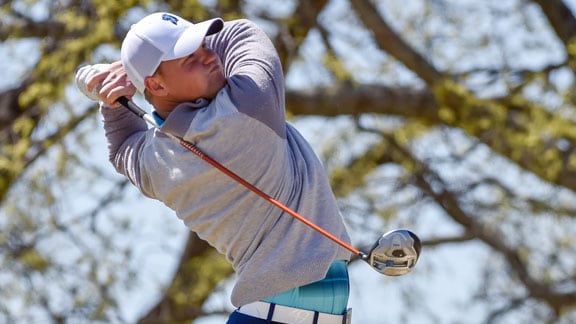 It’s the first-ever MIAA title for the Bronchos, who closed with a 297 on the 6,977-yard, par-72 Tiffany Greens Golf Club to finish the three-day, 54-hole tourney with an 882 total.  Lindenwood was second in the 11-team event at 891, with defending champion Central Missouri third at 892.

“We played really well the last two days and it feels good to win our first MIAA championship,” head coach Pat Bates said.  “We hit a few bumps out there today, but the guys managed to hang on.”

It was the eighth top-four finish in 11 tournaments this year for the Bronchos, including their second win.

Gray’s 71 was the second-best score of the final round.  Russ Purser added a 74, while Eli Armstrong shot 75, Cody Troutman 77 and Eric Kline 77.

Gray got off to a hot start with birdies on his first two holes en route to shooting a one-under 35 on the front nine.  The senior offset two back-nine bogeys with a pair of birdies to come in with an even-par 36 to finish off the 71.

Gray’s final-round charge lifted him to a tie for second in the individual standings with a one-over-par 217 total, while Troutman tied for seventh at 220.

UCO earned the conference’s automatic bid to the NCAA Division II Men’s Golf Championships and will go to Allendale, Mich. May 2-4 for the Central/Midwest Super Regional.