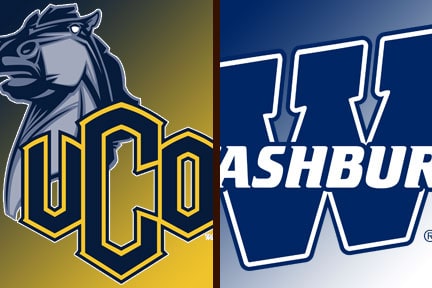 TOPEKA, Kan. (Oct. 24) – Wide receiver Myles Tease had a pair of long touchdown catches in the second half to spark a Central Oklahoma rally that carried the Bronchos past Washburn 38-27 here Saturday afternoon.

Tease made his first start of the season and had the best game of his career as the 5-10, 175-pound sophomore caught five passes for 166 yards with TDs of 57 and 82 yards in helping the Bronchos overcome a 14-10 halftime deficit for their second straight road win.

Linebacker Malcolm Howard led a defensive unit that limited the Ichabods to 149 second-half yards and the Bronchos stuffed Washburn on its final four offensive possessions of the game in salting out their third win in four outings.

UCO improved to 3-5 on the season and in Mid-America Intercollegiate Athletics Association play while dropping the Ichabods to 4-4 and 4-4.

“We had some guys step up and make plays on both sides of the ball,” head coach Nick Bobeck said. “It’s tough to win on the road in this league and I thought our guys showed a lot of toughness today. We got after it and played a good, physical football game.”

The Bronchos outgained WU 479-357 with quarterback T.J. Eckert hitting 16-of-28 passes for 304 yards for his third straight 300-yard game. Six different receivers caught at least one pass as UCO played without a pair of starters (J.T. Luper and Josh Crockett), with Tease leading the way.

Clay McKenzie bulled his way to his fourth consecutive 100-yard rushing game, finishing with 123 yards and two TDs on 29 hard-earned carries, with his one-yard scoring plunge with 2:43 remaining sealing the win.

Howard finished with 11 tackles, including 1.0 for loss, while safety Cody Jones added eight tackles and a forced fumble. End Collis Walker had two tackles for loss in his return to action after missing the previous two games to injury and cornerback Omari Cole had UCO’s third interception of the season.

The Bronchos trailed 14-10 at halftime, but scored on their first two possessions of the third quarter to jump in front 24-14.

Tease ignited that spurt with a 57-yard TD after catching a short Eckert pass and sprinting away from the WU secondary, with Easton Pingleton’s 39-yard punt return setting up UCO’s next score.

The Bronchos had to go just 29 yards and Eckert’s 21-yard pass to Connor Pulley covered most of that before McKenzie barged in from two yards out to put UCO on top 24-14 with 10:41 left in the third period.
The Ichabods used a 44-yard TD run to trim that lead to 24-21 and then took advantage of a short punt to move in for another quick score in going ahead 27-24 with 6:46 still to play in the third quarter.

WU got the ball right back at its own 43-yard-line with an interception off a tipped pass, but Walker had a four-yard tackle for loss as the Bronchos forced a punt.

It took just one play for UCO to move ahead for good.

On first-and-10 from their own 18 the Bronchos went to the air and Eckert found Tease open at the 30. Tease made the catch and sprinted down the Washburn sideline before stiff-arming a defender at the WU 30 and cutting inside to complete the 82-yard scoring play.

It was the ninth-longest TD catch in school history and gave UCO a 31-27 lead with 2:47 still left in the third.

Cole’s interception and another Walker tackle for loss stopped Washburn’s next two offensive tries before the Bronchos iced the game with a 10-play, 61-yard TD drive.

Eckert’s 14-yard pass to Caleb Moss on third-and-five was the key play in the drive that McKenzie ended with his one-yard smash that upped the lead to 38-27 with just 2:43 remaining.

The Bronchos took a 7-0 lead midway through the opening quarter with a seven-play, 77-yard drive.

McKenzie ripped off a 15-yard run and Eckert had a 14-yard pass to Pulley before Caden Locke made a sensational grab for a 38-yard gain down to the Washburn two.

Darrack Harger came in at quarterback to get the score on the first play with there, strolling into the end zone untouched. Seth Hiddink added the extra point to make it 7-0 at the 6:12 mark of the first quarter.

The Ichabods tied it with a 62-yard TD bomb early in the second period before UCO regained the lead on a short Hiddink field goal after taking over at the WU 41 following a botched punt.

Eckert had a 14-yard pass to Pingleton as the Bronchos moved to a first-and-10 at the 14, but UCO went nowhere from there and Hiddink came on to boot a 31-yard field goal that made it 10-7 with 7:57 left in the half.

The Ichabods threatened on their next possession, but Jones forced a fumble at the UCO 21 that Carson Smith recovered.

The Bronchos failed to pick up a first down and then had a punt partially blocked, which WU returned to the UCO 19 to set up a short TD drive that gave the Ichabods a 14-10 lead with 40 seconds left in the half.

UCO goes back on the road next week, traveling to Tahlequah to take on Northeastern State in the annual President’s Cup battle.