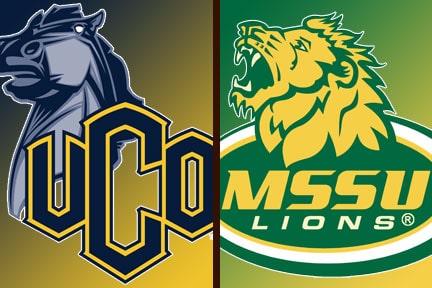 JOPLIN, Mo. – T.J. Eckert got a surprise start at quarterback and spearheaded a record-setting offensive assault that carried Central Oklahoma to a 55-21 mauling of Southern Missouri here Saturday night.

Eckert made his first start since the final game of the 2013 season and completed 26-of-38 passes for 353 yards – the 10th-best game in school history – and three touchdowns while directing an attack that piled up 661 yards with a school-record 37 first downs.

The Bronchos led 14-0 lead six minutes into the game, took a commanding 31-7 advantage into intermission despite committing three turnovers and were never tested in winning their second straight game, improving to 2-4 on the second.

“We controlled the line of scrimmage on both sides of the ball and came out with a good win,” head coach Nick Bobeck said. “I thought offensively we really mixed things up and defensively we had some guys flying around the football.”

The Bronchos passed for 368 yards and rushed for 293 more in finishing with their 661 total, the second-best figure in school history.

Hard-charging running back Clay McKenzie had 26 carries for a career-best 164 yards and one TD, while quarterback Darrack Harger ran seven times for 43 yards and three scores. J.T. Luper was the leading receiver with 10 catches for 122 yards, with Josh Crockett adding five for 93 yards.

UCO gave up just 321 yards, including only 12 rushing.

Linebacker Malcolm Howard led with nine tackles and cornerback Braden Calip had six with 1.5 for loss, while linemen Deontay Wilson and Kenny Allen and linebacker Colton Lindsey had solo sacks.

The Bronchos took the opening kickoff and covered 75 yards in eight plays to grab the early lead. Eckert completed 4-of-5 passes for 54 yards in the drive and capped it with a 34-yard TD toss to Myles Tease, who took a short slant pass and sprinted untouched the final 20 yards.

UCO forced a quick three-and-out and wasted no time pushing its lead to 14-0 with a six-play, 59-yard scoring drive. McKenzie had the big gainer with a 28-yard dash through a gaping hole up the middle and the sophomore got the score on a 16-yard screen pass from Eckert against an all-out blitz.

MSSU had a golden opportunity to cut into that deficit when UCO lost a fumble on its own one-yard-line late in the period, but the Bronchos responded with a brilliant goal-line stand.

Carson Smith had a tackle for loss and Levonte Douglas broke up a pass in the end zone as the Lions lost one yard in three plays before Cody Jones ruined a fake field goal try by tossing MSSU’s place-kicker for a two-yard loss.

The Lions recovered another fumble early in the second period and turned it into their first TD to make it 14-7, but UCO scored the next 17 points to take command.

Seth Hiddink’s 26-yard field goal made it 17-7 and then Luper’s 26-yard punt return set up a short scoring drive that Harger ended with an eight-yard keeper, stiff-arming a defender the final five yards into the end zone.

The Bronchos got their final first-half score with a last-minute drive, going 62 yards in 2:12 before McKenzie’s one-yard plunge with 21 seconds left made it 31-7.

The lead grew to 41-14 late in the period on Eckert’s perfectly-thrown 27-yard TD pass to Luper, with Harger sandwiching MSSU’s final touchdown with scoring runs of four and 17 yards.