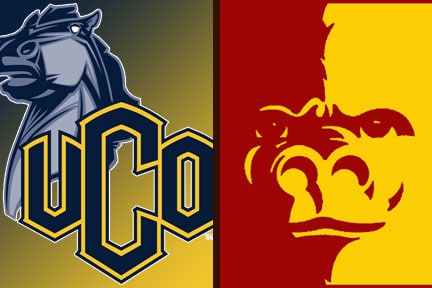 The Bronchos jumped on top 14-0 five minutes into the game, racked up 432 first-half yards in taking a 35-17 lead and were never really tested in winning their fourth straight to end the season 6-5 after an 0-4 start.

UCO, which went 8-4 last year, finished with a second straight winning season for the first time since 2003-04.

“Our guys came out ready to play today and we executed well,” head coach Nick Bobeck said.  “I’m extremely proud of our young men for the way they stayed in there after the way we started the season.  We are a good football team and we showed that today.”

The Bronchos finished with 635 total yards, the fifth-highest total in school history and the third time this season they eclipsed the 600-yard mark.

Eckert completed 31-of-41 passes for 410 yards – the fourth-best game in school history – and three touchdowns, while McKenzie rushed for 149 yards and three TDs on just 17 carries in tying a school record with his eighth 100-yard game of the season.  J.T. Luper ended up with nine catches for 149 yards and two scores.

UCO gave up 64- and 99-yard touchdown plays, but also forced seven punts in beating the Gorillas for the first time since 1968.

Linebacker Malcolm Howard led the defense with 15 tackles, while safety David Busby had seven and linebacker Ben Jones six with 3.0 for loss along with a forced fumble and interception.

The Bronchos scored the first three times they had the ball on a 12-yard McKenzie run and five-yard Eckert scamper before answering a PSU touchdown with Eckert’s 18-yard TD toss to Connor Pulley to lead 21-7 10 minutes into the game.

Eckert’s 65-yard bomb to J.T. Luper made it 28-7 early in the second and McKenzie broke off a career-long 75-yard TD run midway through the period to up the lead to 35-10.

The Gorillas got within 35-17 by intermission and then had the lone third-quarter score with a 99-yard TD pass and two-point conversion to make it 35-25, but that was close as it got.

A roughing-the-punter penalty kept alive a UCO drive that ended in McKenzie’s three-yard scoring burst to push the lead to 42-25 early in the final stanza, with Eckert’s 27-yard TD toss to Luper making it 49-25 to put the game away.

The Gorillas tacked on a last-minute score to arrange the final margin.