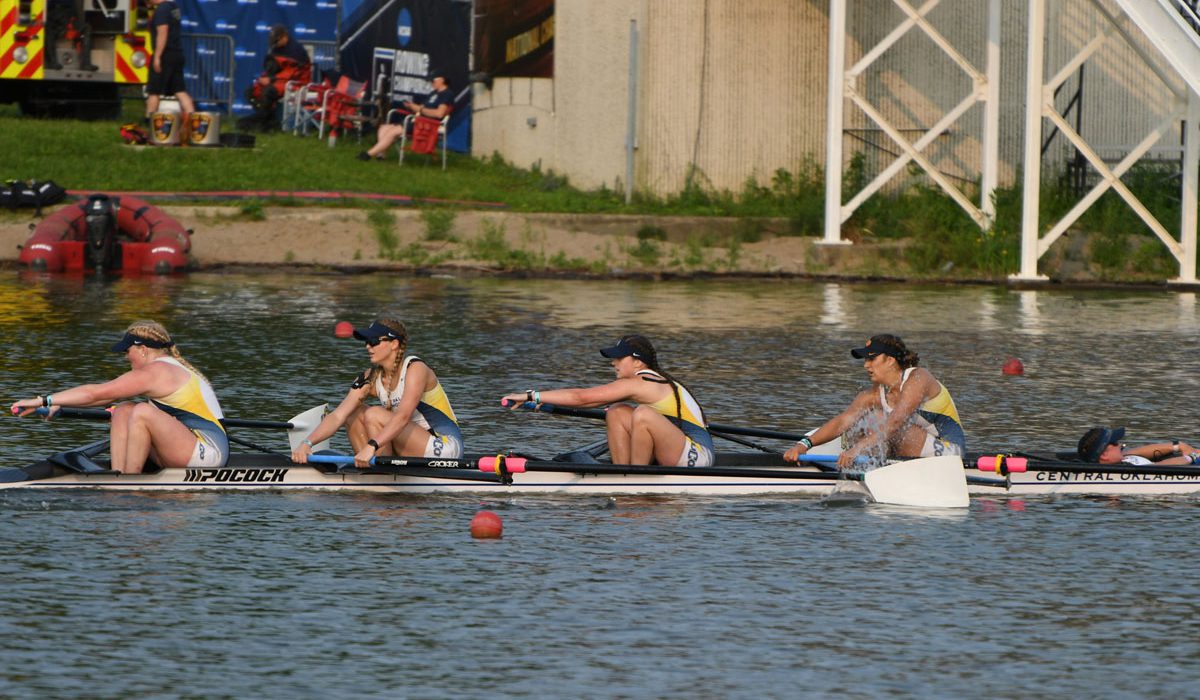 INDIANAPOLIS – The University of Central Oklahoma rowing team won the 2019 NCAA National Championship Sunday morning with a pair of dominant performances in the water at the Indianapolis Rowing Center at Eagle Creek Park.

“I’m so proud of this team,” UCO head coach Montia Rice said. “They’ve worked so hard all season, even before the season started, to make sure they were standing here in the end. They never quit working and they gave everything they had today in their last race of the season. It’s great to see their hard work pay off.”

Central Oklahoma earned 30 team points Sunday. The Varsity 4+ won first place to earn 12 team points and the V8+ followed that with a first-place finish to earn 18 more points and send UCO to the stage as national champs.

UCO’s Varsity 4+ boat was up first and got off to a good start. Florida Tech inched ahead of the Bronchos in the first 250 meters, but Central was quick to overcome and led after 500 meters. UCO pulled farther and farther ahead over the next 1,000 meters, and in the final stretch, it was all Central Oklahoma.

The Broncho fours won first place over Western Washington, which passed FTU late in the race, and Seattle Pacific, in Sunday’s Grand Final. It’s the first time in school history for the Broncho fours to win a national championship. UCO got a crucial 12 team points for the win.

Led by coxswain Blair Johnson, Shelby Wackerly, Ali Nakvinda, Savanna Hammonds, and Lauren Wall put on a dominant performance in their final race of the season to claim the school’s first national title in V4+.

The Varsity 8+ followed 10 minutes later and followed a similar pattern as the fours. FTU got off to a good start and found itself a few feet ahead for the first 500-750 meters of the race. But the Bronchos had no intentions of losing Sunday.

Led by coxswain Madisyn Kitchell, the Broncho eights turned it on to take a lead at 1,000 meters and never looked back, pulling ahead by as much as 50 feet – one boat length – before cruising to the first place finish. Kitchell’s boat of Cameron Blunk, Laura Francis, Megan Dwarshuis, Eileen Anderson, Erica Mitchell, Bailee Thomas, Kiele Erickson, and Siobhan Quirke won the top honor in V8+ racing and gave Central a third consecutive V8+ national title. Darshuis, Anderson, Mitchell, and Erickson have rowed in all three V8+ national title boats for Central Oklahoma.