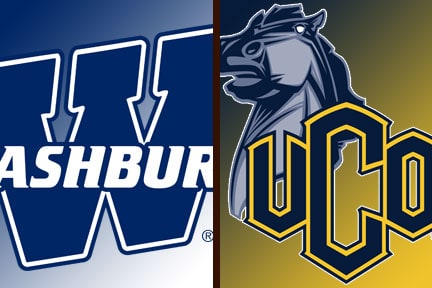 EDMOND – What was expected to be a showdown between two NCAA Division II powers instead turned into a runaway for Central Oklahoma Saturday night at Hamilton Field House as the No. 11-ranked Bronchos overwhelmed No. 14 Washburn.

UCO overcame a late four-point deficit in pulling out a 25-22 first-set win, never trailed in taking the second set 25-18 and completed its 20th sweep of the season – including all 12 home matches – with a 25-19 triumph.

The Bronchos improved to 23-2 overall and 9-2 in Mid-America Intercollegiate Athletics Association play while the Ichabods had a 10-match winning streak snapped in falling 20-5 and 10-2.

“I was proud of the way we battled tonight and that was a big win against a great team,” head coach Edgar Miraku said.  “We got off to a shaky start, but made a good comeback in getting the first set and that gave us a big boost.”

Sophomore standout Taylor Bevis was the driving force for UCO’s offense, knocking down 20 kills with a .311 hitting percentage in addition to making a team-high 16 digs and getting two blocks.

Washburn had the Bronchos on the ropes in the first set after taking an 18-14 lead, but two kills by Bevis and another by Spence keyed a 5-1 run that tied it at 19-all.  UCO finally took the lead for good at 22-21 on a WU hitting error and Bevis had two more kills in finishing off the comeback.

Two spikes from Bevis and another by Spence made it 3-0 quickly in the second set and the Bronchos never trailed.  The Ichabods were within striking range at 19-16 before Petties’ emphatic shot down the middle sparked a 4-0 spurt that put it away.

The third set went back-and-forth early before Washington had two kills in a 6-1 run that turned a 5-5 tie into an 11-6 lead.  UCO went on to take a 17-8 advantage and coasted in from there to complete the sweep.

The Bronchos finish up the regular season home schedule next weekend, hosting Central Missouri and Lindenwood.