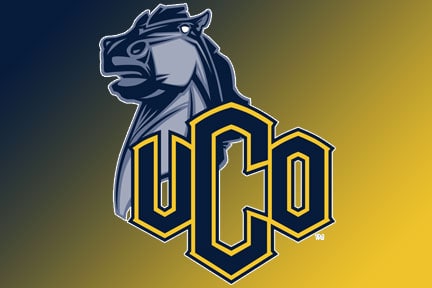 The Bronchos (17-1, 8-1) had one of their worst offensive performances of the year. But UCO’s stifling defense came through in the clutch to fend off a feisty Riverhawk bunch.

“That was tough,” Hardaker said. “To have that kind of a shooting night and come away with a win is hard, and rare to. It would be no surprise if we lost today, so I’m really proud of the girls for fighting through and hanging tough on the defensive end.”

On the milestone win.

“Oh, that stuff isn’t as important to me,” Hardaker said. “I’m glad these girls could be a part of it. These seniors deserve a lot of credit. And it’s all about them anyway.”
UCO trailed at halftime Saturday, 21-19, and only had three players score in the first half. Olivia Mason had 12 points, Marley Anderson had five, and Megan Womack had two.

The Bronchos were just 6 of 28 from the floor at halftime, and made only 2 of 15 in the second quarter. The second half didn’t get any better offensively. UCO finished with a season-low 23 percent from the floor on 13 of 55 shooting.

But as has been the case this season, the Broncho defense was running like a well-tuned machine.

Northeastern State finished 25 percent from the floor, on 15 of 59 shooting. The Riverhawks were forced to shoot from outside and only made 5 of 30 3-pointers. The Bronchos also forced 14 NSU turnovers.

UCO in the fourth quarter only scored nine points, seven of those came from the free throw line. After Jesheon Cooper hit a pair of free throws to make it 41-39, the 6-foot-5 center came up with a steal in the paint, the 14th turnover of the game for the Riverhawks.

Melinda Murillo made another pair of free throws to make it 43-39. After a deadball, The Bronchos forced a 5-second violation against the Riverhawks and despite Murillo missing one more free throw, UCO held on for the win.

Mason led the Bronchos with 13 points, Anderson and Murillo each finished with 10. Cooper had four points, 11 rebounds, and two blocked shots. Womack finished with four and Blake Blessington added two.

The Bronchos finish a four-game road trip with games at Pittsburg State, Thursday, Jan. 26, and at Missouri Southern, Saturday, Jan. 28.