Mason has game winner at home over SNU 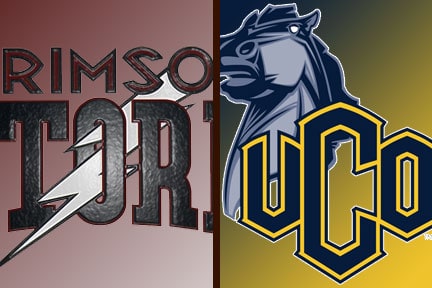 It was the first lead since early in the second quarter for the Bronchos, who committed 21 turnovers and trailed the majority of the contest before pulling out the come-from-behind victory in just their second home game of the season.

UCO improved to 8-1 with their third consecutive win, while the Crimson Storm fell to 2-5 with their fourth straight loss.  The Bronchos resume Mid-America Intercollegiate Athletics Association play Saturday afternoon at Northeastern State.

“That was one ugly win, but we’ll take it,” head coach Guy Hardaker said.  “We weren’t ready to play and were sloppy all night.

“Give SNU a lot of credit, they were a scrappy bunch and had us on the ropes.  We did some good things defensively in the fourth quarter to give us a chance and Julia hit a big-time shot at the end.”

UCO trailed by as many as 11 in the third quarter and were down six (58-52) in the final stanza before finally pulling even at 60-all on two Jordan Ward free throws with 2:28 remaining.

The teams traded misses before SNU scored at 1:00 to go up 62-60, but McKenzie Solberg hit a pair of pressure-packed foul shots at 0:34 to tie it up again.

Haley Weathers came up with a steal on the other end with 26 seconds left and after a timeout the Bronchos worked the clock down before Ward found Mason open just outside the free throw line.

The senior standout drained the shot with 2.6 ticks remaining and SNU was unable to get off a desperation heave before the buzzer sounded.

Solberg led UCO with a game-high 22 points, hitting 7-of-16 shots with two 3-pointers and 6-of-7 free throws.  Mason finished with 15 points on 6-of-12 shooting with one trey and a pair of foul shots to go with three steals.

The Bronchos trailed 15-13 after the opening quarter and took their final lead until Mason’s game-winner when Bailey Taylor opened the second period with a 3-pointer to put UCO on top 16-15.

SNU hit two straight long-range bombs to go ahead 21-16 and led 31-26 at intermission as the Bronchos had 13 first-half turnovers.

SNU still had a 10-point lead at 47-37 before the Bronchos closed to within four (52-48) by the end of the period, getting points from four different players.