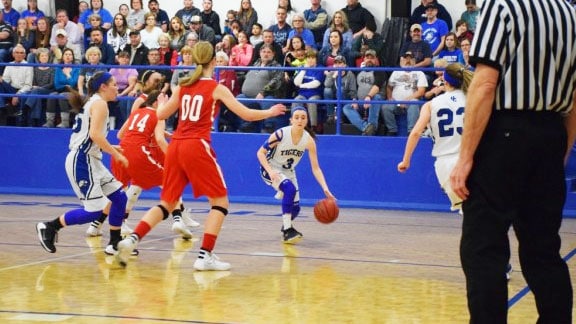 The Tigers and Lady Tigers are working hard to prepare for the upcoming basketball season that include long afternoon practices and early morning practices. Both teams have great expectations this year and have high hopes of returning to Area and making a run at the State Tournament.

Great athleticism, heart, and hustle are to be expected from Union City as it is every year. The girls and boys are looking to conquer the season and are anxiously awaiting their first game.

Although many strong players were lost, many players are set to return and make an immediate impact. Multiple underclassmen are hoping to step up and fill the void that was left from the departing seniors. The season will be one of hopefully many ups, but will likely also have some downs. Nevertheless the Union City teams will be there to put up a fight. Neither team will settle for defeat and are improving to take on quality opponents throughout the upcoming year.

“This basketball season should bring a lot of success to our girls,” Anderson said. “We return a lot of great girls that have been working very hard getting ready for scrimmages. I’m looking forward to getting to that first game vs. Lookeba which should be a really competitive and exciting season opener.

“I really enjoy coaching this group and I hope we have some fun and accomplish a lot this year.”

Coach Rennels is entering his fourth year coaching at Union City and had this to say about the upcoming year:

“I am excited about the upcoming basketball season. The boys have been working hard in practice these past couple of weeks.

“With two weeks before our first game at Lookeba-Sickles our focus right now is improving and building on every practice. I think that this group has a chance to have a very successful season given that they continue to work hard and improve each day as this season progresses.”

Both teams will be taking part in scrimmages to help prepare them for their first game. Still ahead are:

Come out and support Union City for the season opener on Nov. 4 at Lookeba-Sickles. The Lady Tigers will be taking the court at 6:30 p.m., followed by the Tigers.

This story was originally posted on the Union City Schools athletic site and is republished with permission.