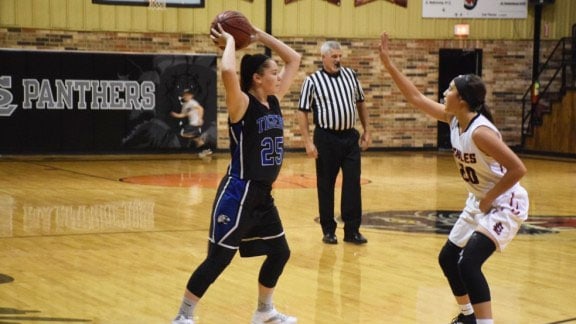 The Union City Lady Tigers took Lookeba-Sickles to overtime on the road. But the Lady Panthers grabbed momentum and shot well at the free throw line and won the season opener, 73-65.

The Lady Tigers came out sharp on Friday night and in the first quarter held the Panthers to only two points the majority of the eight minutes. They held a commanding lead, hitting three three-pointers and two field goals.

However, the Panthers quickly came into rhythm scoring 13 points, setting the theme for the night, with a tied score of 15-all.

Moving on to the second quarter, both teams scored consistently throughout the quarter. Morgan Englebretson continued her hot streak, adding another seven points to the score board, along with Kennedy Sepulvado with four points, followed by Alex Chipps with two points.

Although the Lady Tigers were scoring well, the Panthers were also putting up points at an impressive rate. The teams ended the first half, tied again at 29.

Despite their best efforts, the Lady Tigers gave up 18 points to the opposing team. Still, Union City never stopped scoring, only falling a few points short of another tied quarter.

The gym filled with anticipation as the well matched teams battled through the fourth quarter. The Lady Tigers were down six points in the final minutes of the fourth quarter, as Englebretson knocked down another three-pointer, turning the momentum in Union City’s favor.

Still needing one point the Lady Tigers knew they had to score fast. With three minutes still left on the clock, Chipps managed to score an and-one putting UC ahead two points.

Only needing to hold the Panthers from scoring for less than thirty seconds, the Lady Tigers fouled with .9 seconds left. Lookeba-Sickles hit both free throws, tying the score at 63 and sending the game into overtime, where the Lady Panthers took the win.

The Lady Tigers will be back in action Tuesday, Nov. 8, in a home game against Verden.