USAO athlete reaches out through running 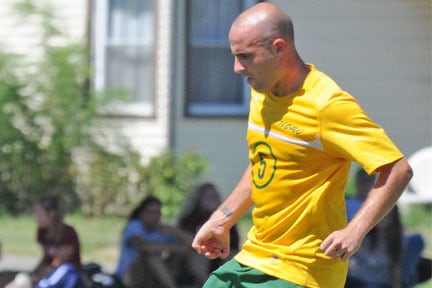 CHICKASHA- Whether for fitness, weight loss or the challenge, running is a part of every athlete’s life. Inspired by the medical challenges facing the infant daughter of a dear friend, USAO’s Scott Parkinson hopes to turn running into something personal that can transform her life.

Tommy Riley, women’s soccer coach at Saint Gregory’s, and his wife, Kellie, were blessed with a daughter less than a year ago. Unfortunately, baby Olivia has battled a heart defect all of her short life.

Olivia already has proven to be a fighter, shining her adorable smile every day, even after having open-heart surgery at just six months old. Parkinson and Neil Hilton, a friend assistant women’s soccer coach at Oklahoma Christian, decided they wanted to do something to help raise money for the inspirational family.

“Basically, we knew that the medical bills were just racking up and racking up even though they were insured. We just decided that me and Neil would get together to help baby Olivia out any way possible,” Parkinson explained. “We just wanted to give them something to help them in any way to get through what they are going through.”

The two immediately set up an online donation site and began training for the annual Memorial Marathon.

Olivia was born last year with a heart condition known as tetralogy of Fallot. The rare condition is caused by a combination of four heart defects. With it, infants develop a blue-tinged skin because not enough blood is able to reach the lungs for oxygen.

With proper treatment, individuals with tetralogy of Fallot are able to live mostly normal lives.

Olivia was just six months old when she first underwent surgery for her condition at Texas Children’s Hospital in Houston.

While the family has health insurance, bills continue to mount as the family spends weeks away from home and accrue other costs.

Naturally, two college soccer coaches and a college soccer player share a common bond with the sport they love. But the relationship among Hilton, Riley and Parkinson runs much deeper.

Back to their lives across the pond.

All three men are from Liverpool, England, finding their way to Oklahoma through soccer.

Hilton and Parkinson actually played soccer together while growing up. Even though Riley is a few years older, they all knew of each other before they reconnected in the States.

“We’ve been involved in each other’s family and circle of friends for many years,” Parkinson said.

This connection made them all part of a tight knit group of Liverpudlians in the area — despite their association with rival universities.

Parkinson is set to compete in the half-marathon, which spans 13.1 miles. While his training began vigorously, it changed course slightly when he got the opportunity to play for the Oklahoma City FC Premier Development League (PDL) soccer team this summer PDL is the pro development league of the United Soccer Leagues.

“It started off, I was doing between 40-50 miles a week training for it and a lot of strength training on the legs,” Parkinson said. “Now that I’ve committed to the team, it’s very hard to train for both. I’ve just turned my preparation into soccer preparation because I know with soccer fitness, I can run a competitive half marathon.”

The team’s second scrimmage will be the day of the marathon.

While he is shooting for a 1:40:00 completion time, Parkinson said his time isn’t as important as the reasoning behind his race.

“I just want to complete it, and I just want people to know the money they put forward, there’s a reason behind it. We are trying to contribute how we can,” he said. “We just want to finish it well and then be able to turn the check over to baby Olivia and Tommy.”

Friends, family and others have donated nearly $5,500 to baby Olivia’s fund.

“We knew there were a lot of people who loved Tommy,” Parkinson said. “So we had a good feeling that people would try to help a friend in need.”

Parkinson said they’ve been impressed with the response and level of charity displayed so far.

“We didn’t think we’d get $5,000 as quickly as we did but now we’ve reached that target we will try to get more,” he said. “We think whatever we raise would go a long way.”

To read more about baby Olivia’s heart condition or to donate to the cause, visit www.donationto.com/Babyolivia.