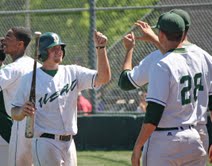 CHICKASHA – The 2013 Drover baseball season presents new challenges, but a lot of the same great ball with a group of players already familiar with the program and the conference.

Head Coach Mike Ross said that while he expects a pretty good season out of the Drovers, he doesn’t like to put lofty expectations on the team’s performance so early in the year.

“To put expectations on them in January isn’t really fair. You don’t know everybody’s role yet,” he said. “We’ll just go out and compete and see where we finish. Hopefully it’s enough to get us in to the conference tournament and then the national tournament.”

The Drovers open the season Friday and Saturday against Texas College in Tyler, Texas. They play a few more away games before the home opener against Saint Mary’s. They will play two doubleheaders beginning at 1 p.m. Feb. 8 and Feb. 9.

With 16 seniors and most of the team returning from last season, Ross said he won’t be looking to any one or two players to lead the team.

“There’s a great group of seniors who know what the league is like. Their expectations for each other are high. I don’t expect one or two of them to lead the team. It’s a group effort, and they understand that,” he said. “They understand if they all go out and do their job, it’s a successful season.”

Ross said it is hard to predict how the team will look this season. While the team has potential to be stronger than those in previous seasons, changes in the conference have led to additional games against some of the nation’s best.

With Oklahoma Christian, Southern Nazarene and Northwestern Oklahoma State moving up to NCAA Division II, the Sooner Athletic Conference is down to just eight teams in baseball.

This led the conference to convert from a three-game series made up with a nine-inning game and two seven-inning games to a four-game series of two sets of doubleheaders, with each game being seven innings.

“It will be different coaching in it, and it will be difficult playing in it,” Ross said. “Our biggest weakness is that we haven’t had to play four-game series before. It’s hard to stay hooked up for a doubleheader every day.”

“It’s going to be an interesting year,” Ross said. “I think the conference is going to be tougher, honestly. You’ve added games against some of the highest caliber teams in the nation.”

The preseason conference poll, voted on by conference coaches, placed USAO fifth, which is where they ended the 2012 season. That season, the Drovers earned a record of 28-21, going 17-13 in the SAC.

“We have a good club. I expect them to be competitive. We were voted to finish fifth, but I expect more than that of them,” Ross said.

Just two of the Drovers pitchers are returning conference starters from last season. David Garcia, a senior from New Mexico, has pitched for the Drovers the last two years. He had the lowest earned run average (3.93) on the 2012 team and allowed just 23 earned runs in 197 batters faced.

Seth Sturgeon, USAO’s other returning starting pitcher, had the next lowest ERA (4.27) and had the team’s most wins, completing the season with a record of 7-1.

“Blake McMullen is going to have to step up this year and be a starter for us,” Ross said. “We need Seth Sturgeon to have another good year on the mound. As well, I expect big things from Simon Mitchell and David Garcia on the mound. Today, those are probably our four starters.”

Returners Josh Goodman and Clinton Selman will be Ross’ leaders out of the bullpen, with newcomers Chris Fischer, Aaron Copfer and Arnold Gomez and returners Dakota Blanchard and Josh Terrell filling in the gaps and rounding out the pitching staff.

Coon, who will likely play left field, led the team in batting average (.402) and nearly every other offensive category. Wilda, the starting third baseman, batted a .394 and came in 10th in the NAIA in doubles per game. First baseman Gonzalez scored 31 runs for the Drovers and batted in another 38.

One of the team’s new faces is Assistant Coach Sam Hayden, who took over for Matt Hibbitts this summer when Hibbitts left to focus on earning his master’s degree as a graduate assistant at the University of New Mexico.

Hayden is a USAO graduate who coached the 2007 season as a student assistant.

“On the field, I don’t see anywhere where we are weak in any particular place,” Ross said.  “Our strength is our senior class. We have a bunch of guys who were here last year, who were in the league and know what is expected of them.”

Ross said his biggest request of his players is to live up to their potential and play like a team.

“I expect them to go out and play hard every day and to have confidence in themselves and their teammates and go out and compete,” he said. “If we do what we are capable of, it will be a good year.”