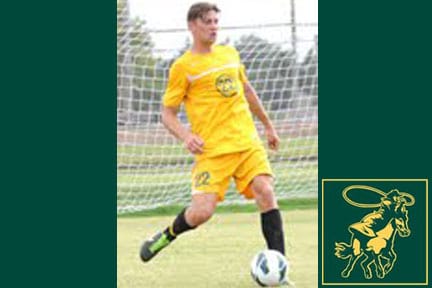 “We have to prove ourselves again.”

CHICKASHA – The Drovers have built up quite a legacy after four trips in a row to the NAIA Men’s Soccer National Championship tournament. None of the current players have experienced a season without a trip to Alabama. Nationals are an expectation.

They have experience playing on a national stage, but can the 2013 team live up to the expectations? Head Coach Jimmy Hampton says it may take several weeks to determine that.

“There’s a lot of pressure on the men,” he said. “Fortunately, we are quite deep with all the returners coming back and a lot of new talent that came in.”

The Drovers went undefeated last year until getting knocked out of the tournament by the eventual national champions, Belhaven, in a 2-1 loss. The Drovers went 14-1-4 overall and ended the season ranked 10th in the NAIA.

And that’s exactly where they start 2013. In addition to a Top 10 spot nationally, the Drovers were picked for the fourth year in a row to take the Sooner Athletic Conference title.

“We are only in that spot due to last year’s success, and it’s a new year and we have to go prove ourselves again,” Hampton said.

Parkinson will be playing in his fourth and final year for the Drovers. He’s started in nearly every game in the last three years. As a defender, he has scored 12 goals for USAO.

Sansford, also a senior, led the team in goals last season with 15, a third of which were game winners. In the two years at USAO, he has scored 27 goals.

Byars is just a junior, and in two years in the box, he has tied assistant coach Alexis Vizarelis in career shutouts at 21. His career goals against average is second in school history at 0.650.

But even the title of All-American isn’t enough to ensure a spot in the starting lineup, Hampton said.

“We need Jean Gnapi and Kyle Maxwell to be very good up top as they have taken the two starting forward positions to open the season — beating out two veterans and All-American Perry Sansford in the early going,” he said.

In addition to their solid core of returners, Hampton said he has a handful of new players who are likely going to come in and start immediately, including Jamie North and Alwin Komolong.

“To be fair, with the starters coming back, if I were a betting man, I’d bet they wouldn’t all start this year,” Hampton said. “At the end of the day, we brought some talent in … we tell them every day ‘your performance today will dictate who plays tomorrow. Nothing more, nothing less.’”

North is a freshman midfielder from England. Before USAO, he was a top goal scorer and two-time player of the season in England.

Komolong, also a freshman, grew up in Papua New Guinea and earned the Golden Boot honor in 2011 and 2012.

Hampton says he has created the toughest schedule to date, taking on powerhouses like Bethel (TN), University of Texas-Brownsville as well as tough conference opponents.

Hampton, a three-time Regional Coach of the Year, is just five wins away from his 200th career win with the men.

The goal for the Drovers is the same as always — the ultimately goal of a National Title. Only time will tell whether this is the team that can do it.

“We will focus on a SAC title and look to make the national tournament and, with a little luck, try to make a run in nationals,” Hampton said. “But in the meantime, we will take it one game at a time.”

The Drovers opened the season this weekend. They compete in their home opener on Sept. 5 against UT-Brownsville. Kick off is scheduled for 3 p.m.

USAO will be live streaming video of each of USAO’s home games this fall. To see the video or for a full schedule of the season, visit usao.edu/sports.