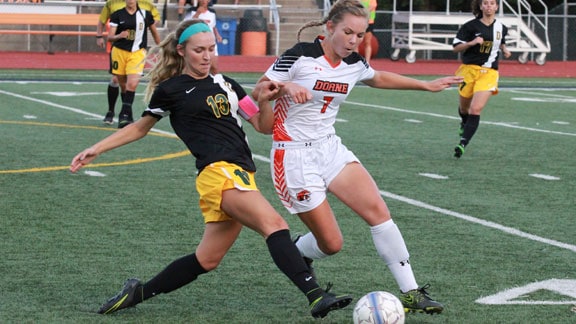 The University of Science and Arts of Oklahoma put a bold statement on the start of its 2016 women’s soccer season with an emphatic 3-0 win at Doane University. The Drovers will continue their two-game swing through Nebraska at Hastings College on Saturday, Aug. 27. Game time is 5 p.m.

USAO scored its first when Kylie Pyle took a pass from teammate Thais Silva and blasted a shot past the Done keeper with 7:55 elapsed in the game.

“I thought we looked very good for a first game,” USAO Coach Jimmy Hampton said. “Our final third was outstanding. We kept the ball in the middle of the park and our back line kept the game simple. Brandi was solid for us again in the nets.”

The University of Science and Arts of Oklahoma squeezed out a tight 1-0 victory at Doane University to capture their first men’s soccer win of the 2016 season. The Drovers got a goal by Joseph Robb to stand as the winner after he scored in the game’s 66th minute. Robb scored on a pass from teammate Conor Fay.

Drover goalkeeper Austen Parker was sharp in the net as he turned away six shots to record the shutout.

USAO was outshot 14-10 by Doane. The Drovers only had two shots on goal, one in each half.

“We had some individuals who gave good effort tonight, but overall our play was not what we are expecting from this group,” USAO Coach Jimmy Hampton said. “We are not done. The coaches are going to re-evaluate and look at doing somethings differently next game. We will be back playing Drover soccer again.”