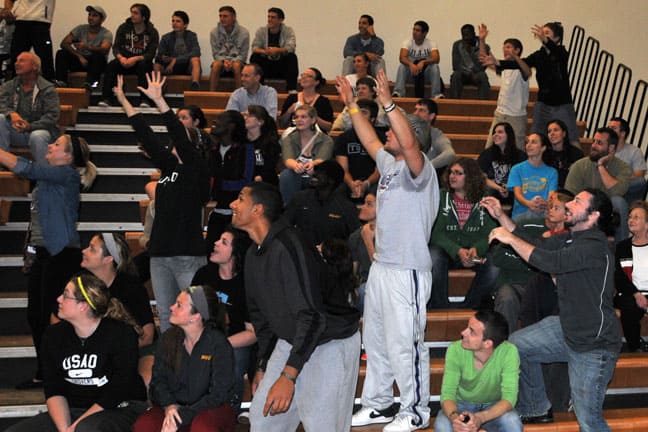 CHICKASHA – Each year as Chickasha gets colder, the University of Science and Arts of Oklahoma begins to go mad in anticipation for Drover basketball season and the school’s annual pep rally, Drover Madness.

Always the week of the season opener, Madness is set for 6:30 p.m. Oct. 28 at the USAO Fieldhouse. The event is free and open to the public.

Madness has been getting fans ready for basketball season for two decades now. Athletic Director Brisco McPherson hosted the first one in 1994 as he entered his fourth year at the helm of the men’s program.

As in years past, Madness serves primarily as an opportunity for fans to meet the USAO basketball teams and get pumped up for the season. This year, fans will get a chance to meet one of the newest members of Drover Nation, Men’s Basketball Head Coach Doug Hall.

“What I’m most looking forward to about Drover Madness is getting the chance to meet people from campus and the community,” Hall said. “It’s a fun time for the kids and fans. We hope they will come out, meet our team and enjoy some great food.”

Madness features fan contests and giveaways, a performance by the Drover Dancers and an introduction of the men’s and women’s teams.

In addition to the traditional events, the men’s basketball team will wow the crowd by showing off some of their favorite moves and dunks, Hall said.

“Drover Madness is always an exciting event,” she said. “Our team looks forward to it each year. It is a great opportunity for us to have some fun and interact with the community.”

The Drovers will open the season later that week on Halloween night. The USAO women host their first true home opener since 2007 as they take on the University of St. Mary’s at 6 p.m.

The game’s theme will be “Halloween Haunt,” and fans are encouraged to don their creepiest or most unique costumes to compete in the halftime costume contest for great prizes. Also, during halftime this season, fans can participate in the A&E Halfcourt Shot for a chance to win a $100 A&E gift card.

The Drover men also open the season on Oct. 31, playing in the SGU Classic. They take on Bacone College at 6 p.m. Friday and Evangel College at 3 p.m. Saturday. Both games are in Shawnee.