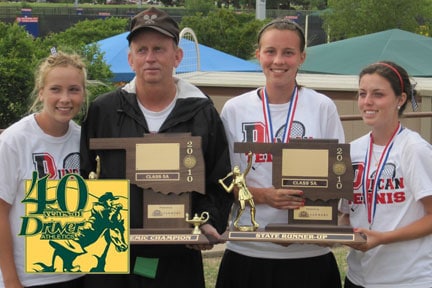 CHICKASHA – Having the tennis program cut at East Central may have been the best thing that ever happened to Phil Barnes.

As a junior in 1978 all of a sudden seeking a new place to play tennis, Barnes found USAO. And from there, his life just fell into place.

“I wouldn’t be where I’m at if I hadn’t gone to USAO. There’s no question about it,” Barnes said. “You don’t think so at the time at you are being molded, but that’s why I am where I am.”

Barnes is one of nine former athletes to be honored at the 40th Anniversary of Athletics, scheduled on USAO’s campus Nov. 1-3.

“It’s always special each time,” Barnes said, speaking of the six team State Championships. “There’s no other feeling like that. Each one is special. Each one is different.”

“I’ve just had good kids to work with,” he added.

The Duncan girl’s team has been state runners up the last five years in a row and the boy’s have been runners up for the last three.

Barnes also has coached 28 individual State Champions and 30 All-State athletes. He recently was nominated for the National High School Athletic Coaches Association Coach of the Year. He was named a NHSACA Regional Coach of the Year in 2008. In 2010, Barnes was inducted in the Duncan Athletic Hall of Fame.

“He was probably the most dedicated tennis player. He loved to play tennis. He was destined to be a coach,” said Brisco McPherson, USAO’s athletic director. “He’s so passionate about it that’s why he’s been successful as a coach.”

While he excelled on the court in college and in his coaching career, Barnes didn’t grow up playing tennis. Originally from Seminole, he played basketball in high school, but once he got on the tennis court, things began to click.

He ended up earning a full athletic scholarship to play tennis at East Central, and when the program was cut, he transferred to USAO.

He played for USAO from 1978-80. He then stayed around the program another year to help McPherson get adjusted to coaching tennis. Barnes graduated in 1981 with his physical education degree.

“I had the opportunity to get to know him pretty well. I was a tennis coach for a while and he helped me with the team,” McPherson said. “We became good friends. He actually helped me learn how to play the game pretty well.”

“I had a great time. It was one of the best experiences of my life. I didn’t realize it much then, but it was phenomenal,” he said. “Playing tennis for the tennis program and the friends I made. I have a lot of good friends I stay in contact with now. Brisco (McPherson) being one of them.”

After USAO, Barnes began working at the country club in Chickasha, which is how he got connected to Duncan schools. He began coaching for Duncan in 1985 and never looked back.

While in Duncan, he met his wife, Paula. Together, they raised a daughter, Melanie, who has gone on to be a four-time All-Star tennis player. His daughter was named No. 1 in the state while maintaining a perfect 4.0 GPA, Barnes said proudly. Melanie Barnes currently plays tennis for Carlton State on a full athletic scholarship.

He said having her come through his program has been one of the highlights of his career.

While he didn’t realize it at the time, Barnes credits his time at USAO for his successful life and career today.

“That’s basically where I learned everything, how to teach and coach,” he said. “And that’s who helped me get a job … That’s how I ended up where I am.”

Barnes’ profile is part of a nine-story series featuring an alumnus from each of USAO’s current and former sports. Each of the alumni featured will be honored with a special award at the 40th Anniversary of Athletics, scheduled Nov. 1-3, 2012, on USAO’s campus.