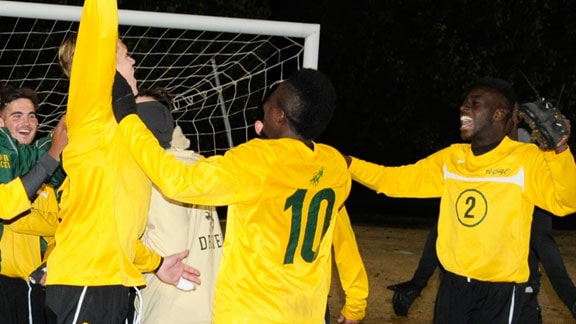 CHICKASHA – Trying to make it seven straight trips to the NAIA National Tournament, The University of Science and Arts of Oklahoma Men’s Soccer team for the sixth year in a row is the pre-season favorite.

The voting was done by the Sooner Athletic Conference head coaches, with the Drovers getting seven of the nine first place votes.

“It’s a good reflection of our program and an honor to be selected by the coaches in the conference,” said Drover Head Coach Jimmy Hampton. “We will do our very best to represent USAO and the SAC with our very best on and off the field.”

USAO, who finished last season with a 18-4 record and winner of the 2014 SAC Tournament, finished seven points ahead of Oklahoma City University, last year’s regular-season champion.

After the opening weekend, the Drovers will travel to McPherson College before coming home to face former conference rival Oklahoma Baptist on September 8 and be the first regular season game under the lights at Drover Pitch. Start time for the game will be at 7 p.m. and will be the first of nine games played in Chickasha.

Hampton and the team started practice this week and will play two scrimmages with the first one going against an opponent very familiar to the Drovers.

USAO will take on Oklahoma Wesleyan at 7:30 p.m. on August 17 in the first pre-season game at Drover Pitch, the last time they faced each other was the 2014 NAIA Opening Round of the National Championship.

In that game, the Drovers were victorious 1-0 to obtain a trip to the final site in Delray Beach, Florida.