CHICKASHA – Chris Francis will take over men’s basketball program at the University of Science and Arts of Oklahoma after head coach Doug Hall resigned on March 12. 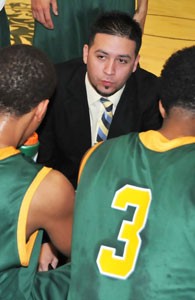 Francis has served as assistant men’s basketball coach for two seasons with the Drovers and recently accepted the position as the head cross country coach.

“I am very pleased Chris has accepted this appointment,” Athletic Director Brisco McPherson said. “I am looking forward to great things from him in the coming years.”

Francis, a native of Cleora, Oklahoma, spent a year as an assistant coach at LSU Shreveport, a Red River Athletic Conference school with a reputation for high-quality basketball, before coming to USAO.

Francis started his collegiate coaching career as a student assistant at Rogers State University in 2011-12, the same place he played for four years. He was one of the first signees to the Hillcat program.

He ended his college playing career with 800 points and became the all-time career record holder for games played (123), steals (139) and minutes played (2,498). Francis was one of four recipients of the Pattison Family Foundation Scholarship and was recognized as a Champion of Character.

Francis takes over for Hall, who led the Drovers to an 8-19 season in his first season and a trip to the Sooner Athletic Conference tournament. Under Hall, the Drovers upset then No. 8 Oklahoma Baptist, a team that was receiving votes nationally.