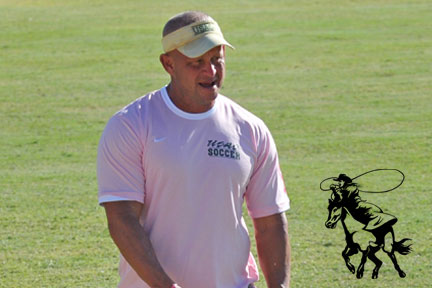 CHICKASHA – Coach Jimmy Hampton earned his 200th career win on the men’s side on Tuesday afternoon in a 3-0 clean sheet over John Brown.

“The 200th is nice, and a representation of all the talented young players and of the staff,” Head Coach Jimmy Hampton said. “Coach Vizarelis has been part of every win as a player or coach, and I am grateful for him as an assistant, along with coaches Orsi and Hubbard and the others before them.”

“I am most happy about a conference win today … I’m proud of the men getting a shut out,” he added.

In Tuesday’s game, the Drovers (5-4, 2-1) came out looking to prove themselves in the Sooner Athletic Conference. They scored all three goals in the first 45 minutes of play.

In the first 15 minutes, junior Kalokwera Okot scored his first goal of the season to put the Drovers ahead 1-0.

The Drovers scored their third and final goal when Maxwell kicked a cross that found Stephen Owusu, who sailed the ball into the goal.

The Drovers had another strong game offensively and spent much of the game on the attack. In total, USAO had 25 shots to JBU’s seven.

USAO’s Bryan Byars (5-4) had three saves in the game. He recorded his third shutout of the season.

Drovers Against Cancer hosted the game and sold concessions and t-shirts throughout the match. At halftime, they honored cancer survivors and caregivers with a special gift.

The Drovers travel to Saint Gregory’s in a Saturday afternoon game at 3 p.m. They play at Northwood next Tuesday before returning home to take on No. 20 Texas Wesleyan on Oct. 19. Kick off is set for 3 p.m.