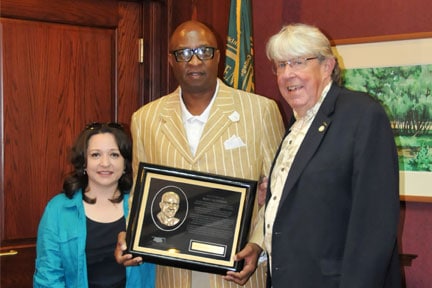 CHICKASHA – After 40 years dedicated to the university’s athletic programs and more than a decade as an athletic director, the University of Science and Arts of Oklahoma’s Brisco McPherson became the NAIA’s fourth member of the John McLendon Minority Athletics Administrators Hall of Fame.

The John McLendon Minority Scholarship Steering Committee unanimously selected McPherson as this year’s inductee, who was a long-time men’s basketball coach and led the Drovers to the 2002 NAIA National Championship.

“It’s humbling to me because it’s an administration award, not coaching,” McPherson said. “It’s right up there with the naming of the USAO court after me and the national championship when it comes to its importance to me.”

The Hall of Fame, now in its fifth year, seeks to recognize individuals who have dedicated their lives and shown a steadfast commitment to enhancing the athletics administration profession. Previous winners from the NAIA include: Clarence E. ‘Big House’ Gaines, Claude English and Dr. LeRoy Walker.

“It comes as little surprise to me that the hall of fame selection committee has singled out Coach McPherson as an individual worthy of praise and recognition,” USAO President John Feaver said. “In the three decades and counting that I have known and worked alongside him, I have found Coach McPherson to be a man of the highest integrity, capable of making the tough decisions and is 100 percent dedicated to the university’s mission.”

McPherson, who has been the university’s athletic director for 12 years, was inducted during the 49th Annual National Association of Collegiate Directors of Athletics Convention in Orlando, Florida. Representatives from NACDA, the NFL, MLB, NCAA, the NBA and the USOC also were inducted during the convention.

“It’s an honor,” McPherson said. “It feels wonderful to be recognized for all your years in the field, and it reminds you that you have affected people’s lives and have been a role model for student-athletes.”

“To look at what he did and then for me to receive an honor named after him, that made it even more special,” McPherson said.

Further, the three previous members into the John McLendon Minority Athletics Administrators Hall of Fame are people McPherson has looked up to over the years.

Walker was the first black president of the U.S. Olympic Committee and a former chancellor and track and field coach at North Carolina Central University.

English is a retired player and coach who played one season with NBA’s Portland Trail Blazers in the early 1970s. He is currently the Director of Athletics at Park University.

Gaines, also a member of the Basketball Hall of Fame, served as a coach for 47 years at Winston-Salem State University and led his team to the NCAA Division II Championship, becoming the first program from a historically black college to capture an NCAA title.

“They are quality people to be associated with. It’s a pretty big honor,” McPherson said.

McPherson has been involved with the university for nearly the entire 40 years of its athletic programs. Playing on the first men’s basketball team at the college, then the Oklahoma College of Liberal Arts, McPherson still ranks among the school’s all-time leaders in scoring, shooting percentage and rebounds.

Three years after playing for the Drovers, he returned as the assistant men’s basketball coach, a position he held for 11 years before becoming head coach in 1991. He retired from coaching after the 2012-13 season but maintained his role as athletic director.

As a coach, he led the Drovers to six NAIA National Championship tournament appearances, including back-to-back trips to the final game in the early 2000s. In 2002, the Drovers claimed the school’s only NAIA National Title. In all, he collected 309 wins and was the 22nd Winningest Active Coach in the NAIA heading into his final season.

In November of 2012, McPherson was inducted into the USAO Athletic Hall of Fame, and that same day, the USAO Fieldhouse floor was dedicated to him and renamed Brisco McPherson Court.

McPherson graduated from USAO in 1976 with bachelor’s degrees in sociology and psychology. He received his master’s degree in physical education from the University of Central Oklahoma in 1984.