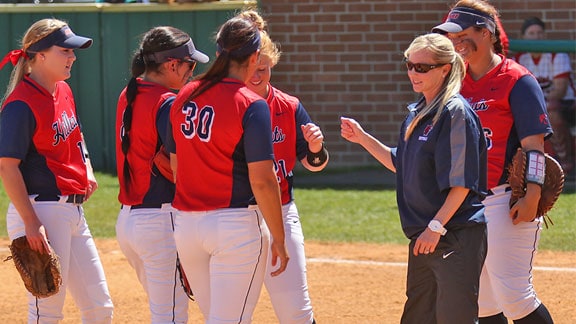 CLAREMORE, Okla. – Director of Athletics Ryan Erwin announced the interim tag has been removed for Andrea Vaughan as she has been named the head coach of Rogers State softball.

“I’m excited to remove ‘interim’ from Coach Vaughan’s title,” Erwin said. “It was very clear that Coach Vaughan was the most qualified and best fit to fill this role for Hillcat Softball. Her leadership, dedication, and commitment to excellence is what we desire within our department and I have no doubt that she will lead the softball program to new heights as we begin competition as active NCAA Division II members beginning this fall.”

“I am ready to take this program to new heights in NCAA Division II,” Vaughan said. “I continue to hit the recruiting trail hard to find the right players to give us a chance to compete post season. RSU has so much to offer from our athletic facilities and our beautiful campus to the academic excellence and variety of degree programs. I look forward to making Rogers State softball a powerhouse.”

The Claremore, Oklahoma native took over as the interim head coach for the Hillcats on Jan. 30 with the resignation of Amy Cope. Vaughan has posted a 17-33 record in 2016 with three non-conference games remaining in the regular season.

Vaughan enjoyed a standout collegiate career at Oklahoma City, making three-consecutive trips to the NAIA National Tournament. The Stars won the NAIA National Championship in 1997, were second runner-up in 1998, and made it to the title game in 1999. Vaughan, a right-handed pitcher, also led the Claremore Lady Zebras to a state title during her senior season in 1994.

“The support that I have received from everyone at RSU and in the community through this transition has been amazing. I’m grateful to Ryan Erwin for giving me the opportunity. He truly gives 100 percent to his coaches and this University,” Vaughan added.

The Hillcats head to Shawnee, Oklahoma for a single game against the Bison of Oklahoma Baptist April 26 at 4 p.m.