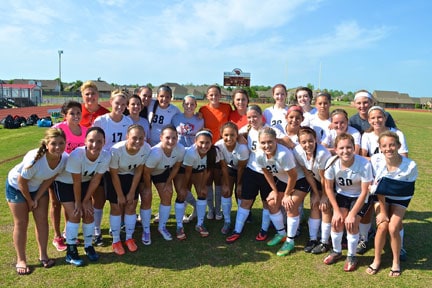 It might be a good idea for the administration at Verdigris High School to take the same measure with the word “four-peat” and get in on the action.

The Verdigris Cardinals achieved the four-peat, not just once, but twice.  And not only in the same school year, but also on the same day!

The boys on the diamond shut out Kansas, 2-0, in the 3A state championship game on May 17.

It is not uncommon to prepare a team in the preseason by telling the players that the goal is to play for a state championship.  But setting the bar high is not too lofty a dream for the Verdigris coach.

“That’s the thing we told them at the beginning of the year and that’s something we don’t shy away from.  It’s who we are, we are the three-time state champion.  And that was our goal – to make history and to win a fourth straight state championship.”

With just one senior on the squad, Ryan Skalnik, the possibility of continued winning is real.

“That’s something that is special for us.  We’ve got eight returning starters and we’ve got all four of our guys on the mound back.  So we’re hoping to just keep rolling around and to win a fifth straight championship.”

But the boys on the diamond aren’t the only four-timers at the school!

On the same day the baseball team won in Shawnee, the Vedrigris girls’ soccer team defeated No. 1 Glenpool, 4-2, in the 4A state title game on the pitch in Tulsa.

“It’s never the same because of the different groups that come through,” Risenhoover said.  “They are all sweet, that’s for sure, but they’re all a little bit different.

“It’s not always the same, but it’s always a great feeling.”

One difference between the baseball team and the soccer team is the amount of upperclassmen Risenhoover had on her team this year.

“We had 10 seniors this year and we had a lot of pressure on us to try to win it again.  You could tell that the seniors felt that pressure also and they just wanted it really bad.”

The seniors weren’t alone, though, when the pressure was on.  Freshman Emily Crowell had a big day in the title game.

“We had a couple of senior forwards that were really dominant and took a lot of attention.  And I think that helped open her up a little and she made some excellent plays.”

And of course, a senior did get in on the scoring as Taylor Beck put in a goal.

The coaches of the two teams recognize the significance of such an accomplishment and celebrated each other’s wins.

“They’ve had a lot of success,” Keith said.  “Of course, they really won it six times.  They had the two vacated early on.  But it’s just something special to have two spring sports win four straight state championships.”

Risenhoover echoed the sentiment and praised the kids from both teams.

“I think it’s pretty interesting,” Risenhoover said.  “But I think it also says a lot for our kids.  They work hard during the season and the offseason.  They’re involved in a lot of other sports, also.  I think it just speaks to the character of the kids that we have at Verdigris.”

And if the Verdigris administration or city fathers decide to capitalize on the term “four-peat,” they would be a step ahead of Coach Riley.

His Lakers team of the ’80s didn’t win three straight.  The Cardinals did that – and one-upped it.