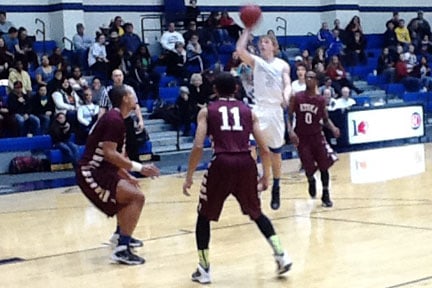 Durant’s boys got a measure of revenge on Atoka from an earlier meeting, while in the opener the girls struggled a bit to get the offense going in the first game after a long break.

Atoka’s girls beat Durant, 39-27, for its second win against the Lady Lions this season.  The Durant boys slowed the pace from their loss to Atoka in their first game of the season and evened things up with a 63-37 win.

Atoka’s Makayla Stephens was held in check through the first half, picking up only six points.  But Durant didn’t take advantage of the opportunity.  The Lady Lions scored only 11 in the first half.

The five-point lead at the intermission held for Atoka.  Stephens went on to score a game high 15 points and was perfect in five trips to the charity stripe.

Fellow senior Shaylynn Bass had 13 for the WampusCats.

Senior Will Engle put in a layup right off the tip for Durant and the Lions never looked back.

The home team did not trail and took a commanding 25-5 lead at the end of the first quarter.

Three players scored in double figures for the Lions, led by Zac Cater with 17.  James Donelan had 16 and Zach Lowe put in 10.

Although the WanpusCats never really found their footing, Bishop Coulter and Bobby Johnson each poured in 16 points.