Welcome to “The Grib”” 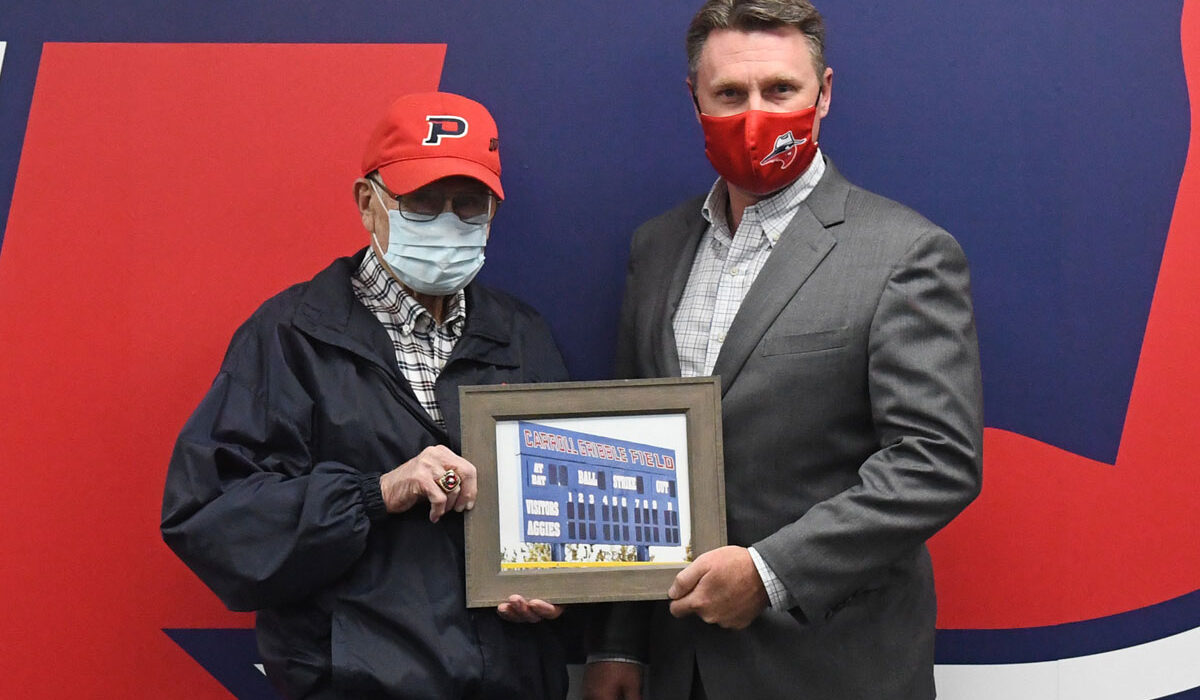 GOODWELL, Okla. – The Oklahoma Panhandle State University baseball field will be named in honor of former player, coach and administrator Carroll Gribble, it has been announced by University President Dr. Tim Faltyn. For decades, the current facility has simply been designated as Aggie Field.

“Now that we have passed a significant milestone in fundraising, I plan to request approval from the Oklahoma A&M Board of Regents to name our baseball field “Carroll Gribble Field,” said Faltyn. “Today I am very pleased to announce that, from this day forward, the OPSU Baseball Field will be known as “The Grib.”

Concurrent with the renaming of the field after Gribble, OPSU Baseball Head Coach Shawn Joy announced a comprehensive campaign for baseball facility upgrades. The project has already reached over half its goal for Phase 1. Anyone who would like to honor Coach Gribble and contribute, should contact Joy at: shawn.joy@opsu.edu or by calling (580) 349-1361.

“I know there are many, many individuals with fond memories of Coach Gribble,” Joy said. “Whether it was as a player under him in football and baseball, or as a student going to see him in the Dean’s Office, this is a way to say ‘Thank You’ to a tremendous individual. And any donation amount is welcome; we just want has many people who have been impacted by him to be involved and a part of the field renaming.”

Upon completion of Phase 1, continuation of the four-phase project will be Phase 2 of the plan, which will include a shared-use Complex between the current baseball and softball areas, with indoor cages, offices, concession area, locker rooms, umpire rooms and restroom facilities.  Phase 3 involves the installation of turf on both fields, with Phase 4 providing stadium lights.

“This is a very significant day for OPSU baseball and all of our Athletics Department,” Interim Director of Athletics Victor Esparza surmised. “We are paying homage to Coach Gribble for all he has done and embarking on the plan to upgrade our baseball – and softball – facilities in the process. Seeing the support pour in already has been so encouraging; there are even more opportunities ahead for individuals and businesses to get behind the mission of OPSU Athletics, as we push forward in the other Phases of this project.”

Coach Gribble was informed by Dr. Faltyn that the OPSU baseball field would now bear his name in a private, surprise on-campus ceremony on Monday, February 8. “I’m speechless,” Gribble would say upon learning of the honor. “I’m glad the (COVID) mask hid the tears. I’m humbled.”

Gribble was elected to OPSU’s Athletics Hall of Fame in 2019. Gribble – a four-year letterman in both football and baseball from 1950-54 – also served the Aggies as an assistant football (1968-79) and head baseball coach (1972-79). Even after stepping away from coaching, Gribble became the school’s Dean of Students.

Gribble grew up in nearby Straight, Oklahoma, attending a one-room schoolhouse to begin his education. He came to what was then Panhandle A&M College, thanks to the assistance of a scholarship, majoring in Agriculture to start (since that was what he was around the most growing up), under football coach Kenneth Hoyt. But Gribble had another educational love. Buoyed by a high school teacher he really enjoyed, Gribble eventually changed his major to history. But after his freshman year, PAMC brought in a new coach named Oscar Williams. Williams – an Aggie Hall of Fame member himself – brought in a whole new coaching style and vision for the Aggies.

But baseball was also engrained deep in Gribble’s athletic soul. Playing on “town teams” – as was commonplace in those days – and with the encouragement of his father, Gribble also labored for Coach Williams on the diamond. At a time when – in the words of the 1952 Plainsman – “many people on the Aggie campus think that baseball is not as important as some other sports,” Gribble obviously disagreed. “I just enjoyed playing,” Gribble would say of his baseball years.

After graduation, Gribble went to Texhoma and embarked on a coaching and teaching career, eventually venturing to South Dakota where he spent three years. Perhaps it was the string of 20 days of sub-zero temperatures in South Dakota or the invitation from Coach Williams to return to PAMC on staff – or a combination of both – that brought Gribble back home to Texas County and Panhandle.

Initially coaching football in 1968, Gribble ascended to the baseball head coach position in 1972 after the passing of Williams before the season. Under his guidance, OPSU baseball would go on to have some of the most productive seasons in school history. With 11 seasons as a football assistant and eight more guiding the Aggies’ baseball program, one can only imagine the thousands of young lives Gribble touched as a part of the PAMC staff.

Dr. Faltyn added, “This honor is more than earned for all that Coach Gribble has given to our University over the years. Whether it was during his own time as a player, while serving as our Head Baseball Coach and an Assistant Football Coach, or later as the Dean of Students. Congratulations to Coach Gribble!”

And with the baseball tradition of generating nicknames for its facilities, “The Grib” will no doubt become a fixture on the OPSU campus for years to come, serving as a reminder of one of the finest individuals to ever represent the Aggies: Carroll Gribble.