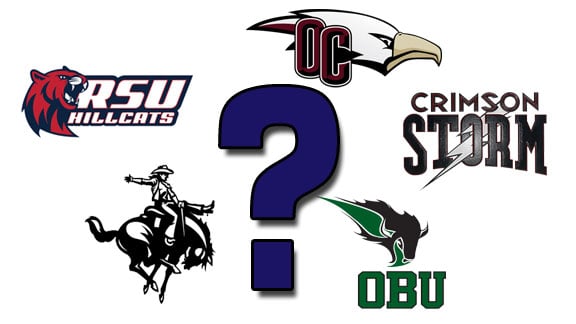 The second wave of schools in Oklahoma migrating from the NAIA to the NCAA is happening right now.

But decisions to undertake that transition and the work that goes with it are not made overnight. Many years go into studying the feasibility of such a move before even applying to do it.

A major determining factor is finding a conference to join upon arrival in the NCAA, one that is to sponsor the school in the passage.

It is an important decision because this is an affiliation that will (or should) be long lasting.

Southern Nazarene University completed the transition to Division II status in 2014, but the decision-making started a decade before. And for Bobby Martin, director of athletics, finding the right conference was a priority.

“At the time that we were going through the process, obviously you have to think about conference affiliation,” Martin said. “Because that is a major part of the process. If you don’t have a conference to sponsor you, it is much tougher to get into the NCAA Divison II.

“At the time, the Lone Star and the Heartland were really the only two conferences that were regional enough for us to consider.”

But when ECU, NSU, SOSU, SWOSU and UCO departed, the lack of an Oklahoma presence in the Lone Star Conferece narrowed the field for SNU.

“As we started the actual process, the Great American Conference started the process of becoming a conference,” Martin said. “So there was really no real consideration to the Lone Star at that point, since the Oklahoma schools were leaving the Lone Star.

“We felt like the Great American Conference that was being established was the right fit for us at that point.”

And there was a parallel for SNU with the establishing years of the GAC.

“The good thing about it is the growth process of the GAC, a lot of it was taking place at the same time as our transition,” Martin said. “They brought in a great leader in Will (Prewitt) and he helped us tremendously in the process, in giving us another resource person.

“All of it played together. The Oklahoma schools, I would call them their athletic directors and ask them questions. It came together beautifully for us that the process was happening at the same time.”

Southern Nazarene wasn’t the only school to make this move, though the Crimson Storm was the first to complete the transition to active membership.

Oklahoma Christian and Northwestern both received word this month that each has successfully the three-year transition and are full members.

Rogers State is moving into the Provisional Year (the third year) in 2015-2016 and Oklahoma Baptist is starting Year Two this year.

Curtis Janz talked about the diversity that is now the Division II landscape in the Sooner State.

There are now 12 schools in Oklahoma that are, or are in the process of becoming, Division II. Here is the breakdown of the schools by conference:

Almost all the Heartland Conference schools don’t offer football in their athletic programs, which helped Janz and OC with its decision.

“We looked into the Great American, and the Lone Star and the Heartland. But without football, that is a big part of it. And right now, today, the Heartland is a great fit for us. But we’ve all seen the landscape of college athletics and changing the conference affiliations just seems to almost be a part of daily business now.

“I think we’re fortunate to have in the state of Oklahoma four very strong conferences in Division II. It’s frustrating at times, but I think it’s also an asset.”

After the Lone Star Conference dropped from the list of some schools taking steps toward the choice of what school to apply for affiliation with, the next big factor was football.

“Yes, definitely, football was a driving force for us, knowing that we had to figure out a way to take care of it,” Martin said. “Moving in to the Heartland would have distanced us from having enough teams to play and it would be hard to be a good member of the NCAA Division II in football and be independent, I think.”

On the contrary, OC, without a football program, took the opposite route.

“We looked into all of them,” Janz said. “At the time, the Great American was trying to grow their football schools. And that probably played a bigger role for them than it did for us.

“But the Heartland is basically a non-football-playing conference. We do have Panhandle that participates now with the Lone Star in football. But that’s the only school in our conference that sponsors football.

“And honestly, in the past, the Heartland has been one of the weaker (conferences) in our area. But I really believe that with us and Lubbock Christian and Rogers State, it’s becoming more stable.”

An asset of having these schools spread out through four conferences may have produced a beneficial by-product, though.

“What is really interesting right now is that we have great non conference schedules,” Janz said. “Just for us, we will play UCO, which is three miles away, and they’re a great nonconference game. We’ll play SNU and Oklahoma Christian and Southern Nazarene have a long history of being big rivals. In the future, I think we’ll add OBU back into the mix.

“So it really makes for a competitive, rivalry-filled non conference schedule.”

With the case of the Lone Star Conference, losing five members from Oklahoma seemed to push other Oklahoma schools from wanted to join as they made the move to D-II. Although, from the perspective of the LSC, that may have been just fine.

But what has transpired looks, with the perspective of time, to have worked out well for not only those five schools, but also the ones making the move now.

Martin, whose program is now a full member in the GAC, said SNU has joined a conference in which things fit.

“As I look at it, I really believe that it has come together beautifully for the schools in Oklahoma and Arkansas,” Martin said. “The Arkansas schools formerly in the Gulf South were struggling with that and didn’t feel comfortable at all with the direction it was moving.

“So both the Oklahoma schools and Arkansas schools that came together and have been able to form a league that fits our institutions like a glove.

“There are some really positive things outside of just having a place for us to land. They were able to weave it together really beautifully to make it work.”

Five years, five schools from Oklahoma set in motion a chain of events that, for the most have settled into place. The decision then to leave the Lone Star Conference indeed had ramifications throughout the state.

Five years later, how has it all shaken out for NCAA Division II in Oklahoma?