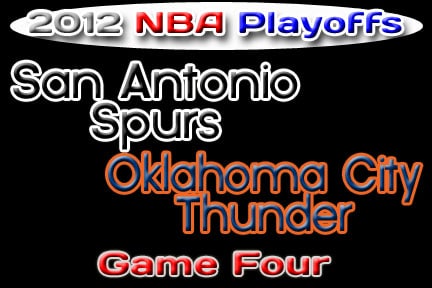 OKLAHOMA CITY – After going down 2-0 in the Western Conference Finals, the Thunder knew they needed to come back to OKC and defend their home court. On Saturday night, they finished that task and evened the series at 2-2 in a 109-103 win against the San Antonio Spurs.

One things that became apparent in Game 4 Saturday night is that Kevin Durant, Russell Westbrook, and James Harden are not the Thunder’s only “Big Three.”  OKC’s big men showed that they can do more than just defend the basket.  Kendrick Perkins scored 15 points and added 9 boards.  Nick Collison shot 4-5 from the field for a total of 8 points in addition to his two steals.  The real story, however, was Serge Ibaka going a perfect 11-11 from the field and 4-4 from the stripe for a career-high 26 points.  With that effort, Ibaka tied Scott Wedman’s 1985 performance against the Lakers and was one shy of Larry McNeill’s NBA playoff record 12-12.  If that was not enough, Serge blocked three shots and pulled down five rebounds.

Most of the points from the Thunder bigs came in the first half, which put the team up 55-43 going into halftime.  The Spurs, however, refused to go down without a fight.  They closed the third quarter on a run to cut OKC’s lead to four.  In the fourth quarter, Kevin Durant made everyone who was not already aware that he is quickly becoming arguably the best closer in the NBA.  The Thunder forward scored 16 points in a row to give the Thunder the lift they needed to foil the Spurs comeback.  Durant finished the game with 36 points, 18 of which came in the fourth quarter, 8 assists, 6 rebounds, and a block.

Even the Thunder players who did not score many points found ways to contribute to the team’s win.  Thabo Sefolosha and Russell Westbrook pestered the Spurs all night on the defensive end.  James Harden only scored 11 points, but he dished out 7 assists and grabbed 7 rebounds.

It certainly was not the blowout of Game 3, but with this win, the Thunder evened up the Western Conference Finals and ensured that there will at least be a Game 6 in the series.  On Monday night, they will try to steal the home court advantage with a win in San Antonio in Game 5.