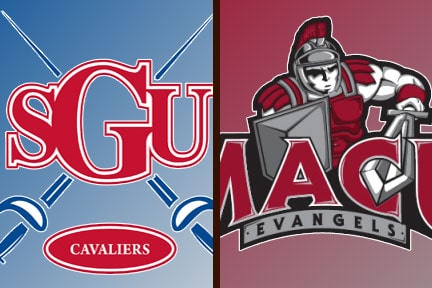 Williams, who came into the game leading the conference in scoring, was part of a Lady Evangel attack that was dominant down low. MACU outrebounded SGU 46-42 and outscored the visitors 40-22 in the paint.

SGU senior Leticia Silva led her team with 18 points on 4 of 9 shooting, while Porsche Young finished with 12 points and eight boards. Parris Price chipped in with 15 for MACU.

The Cavs led 32-31 after a back-and-forth first half that featured eight lead changes. Neither team led by more than four in the first 20 minutes. SGU shot 46 percent in the period but was hampered by a season-high 17 first-half turnovers.

Silva had a team-high eight points at the break as seven of the eight Cavs who saw the floor found the scoring column.

The game remained tight until the 13:39 mark of the second half when the Lady Evangels went on what proved to be a critical run. Tied at 41, MACU outscored SGU 10-1 over the next three minutes to lead 51-42. Price had seven points in that span.

It was after this stretch that foul trouble began to plague the visitors, making a comeback difficult. Two of the Cavs’ top contributors, Silva and Kalie Lucas, picked up their fourth fouls within a minute of each other, and Lucas fouled out with 6:25 to play.

SGU cut it to five on two occasions and then four on a Tess Robbins bucket with 22 seconds left, but it never threatened further.