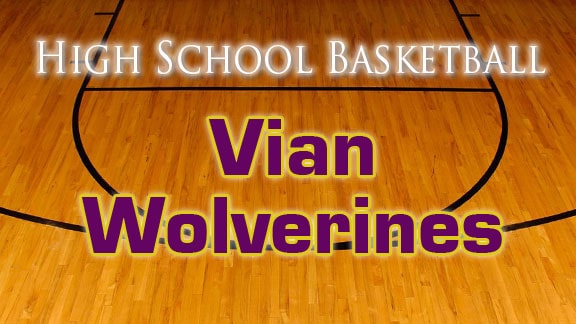 Vian heads into the semifinal of the Sequoyah County Area Classic on a roll.  And the team looks to only get stronger from here.

The Class 3A Wolverines have won seven straight to open this season and face Class 4A Muldrow on Thursday night in Sallisaw.

The Wolverines won the Bill Frye Invitational in Mansfield, Ark., to close out 2014. And they won the championship game over Hackett, Ark., 49-21, without Jennifer Hunter and Desiree Moon, two of their longtime starters.

Senior Nese Walters led the way in the title game and more than picked up the slack for her team, scoring a game-high 19 points.  Vian coach Jordan Garner said he was not surprised by her play.

“She stepped up and did what we expect her to do,” Garner said.  “She can really score and do a lot of things. We leaned on her pretty heavily and she did a good job.”

Vian won its SCAC first round game over Gore, 49-16, on Tuesday.  Walters continued to put up points, another game-high 14, and Hunter returned to score 10.

Moon should come back for the semifinal date with the Bulldogs.

“I sat Moon on Tuesday night just to be precautionary,” Garner said.  “She could have played, but I thought I’d give her ankle a couple more days to heal. But both her and Jennifer Hunter will play tonight.”

The Wolverines are looking strong at this point of the year, outscoring their opponents 57-29 on average.  Garner said he feels pretty good about the way his team is playing.

“Our girls and playing hard right now. They do a good job of playing together. They’re all really good friends. Right now, we’re playing pretty well. We can always play better, but so far so good.”

Vian will continue to defend its SCAC title against Mudrow, which is 6-3.  Garner said his team will have to be tough to get the win.

“We have to defend and rebound. Anytime you play a 4A school, they’re going to be really physical, and we’ve got to match that and make sure we defend and just give them one shot and then rebound the basketball.”

The semifinal matchup is set to tip at 7 p.m.