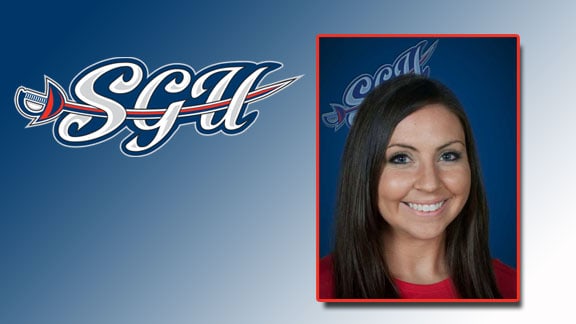 SHAWNEE – Dani Wondrasek has been named the head softball coach at St. Gregory’s, the university announced Monday. Wondrasek, an assistant coach for the nationally ranked Cavaliers for the past three seasons, takes the reigns from D.J. Sanchez. Sanchez was hired at NCAA Division I Nebraska Omaha last week.

“I am both humbled and honored to have the opportunity to lead such a tradition-rich program,” Wondrasek said. “A precedent of excellence has been set here, and I will continue to instill in our players the work ethic that makes us one of the top programs in the NAIA.

“I am grateful for the time I had to work alongside and learn from Coach Sanchez and look forward to continuing to coach this tremendous group of student-athletes.”

During her three seasons at SGU, Wondrasek has helped lead the Cavaliers to the NAIA World Series twice. The Cavs claimed the program’s first-ever regular-season Sooner Athletic Conference title in 2014 and was named an NAIA Scholar Team in 2014, 2015 and 2016.

A record-breaking 2014 season included a program-best 20-game winning streak and 27 Sooner Athletic Conference victories. SGU won its third SAC Tournament title in 2016 and set program marks in both overall winning percentage (48-7, .873) and conference winning percentage (25-3, .893). SGU set a school record after climbing to No. 2 in the national poll last season.

“Coach Wondrasek has been a key component of our recent success, and I am confident that she will continue to attract high-quality recruits,” said SGU Athletic Director John Martin. “I believe her hiring will create a smooth transition in the program’s leadership and am looking forward to the successes that lie ahead for Cavalier Softball.”

Wondrasek, formerly Dani Dobbs, played collegiately at the University of Oklahoma from 2008 to 2011. During her time at OU, she was a member of two Big 12 championship teams and completed her playing career with a trip to the Women’s College World Series.

She earned 2010 Academic All-Big 12 first team honors as a junior and was named to the All-Big 12 second team as a senior. While at Moore High School, Wondrasek was named the Oklahoma Gatorade Player of the Year.