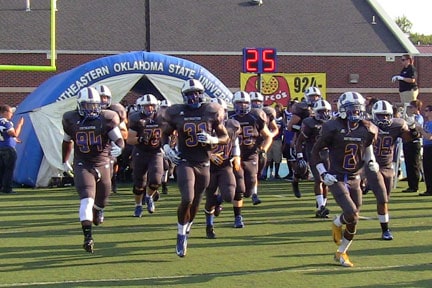 Fans at Paul Laird Field that may have had a propensity to get seasick had plenty of opportunity on Thursday night lean over the deck with the countless momentum swings throughout the game.

In the end, Southeastern righted the ship and held it steady long enough to hold on for a 56-50 victory over Southern Arkansas.

And Savage Storm head coach Ray Richards seemed to be as relieved as he was excited to have won this one.

“We didn’t know we won it, literally, until we were taking a knee at the very end.”

The defenses were supposed to be featured in this season opener for both teams, but the offenses took center stage, to the tune of record setting performances.

Southeastern’s redshirt freshman running back Devlon Wortham was hard to bring down in his debut performance.  Wortham carried the ball 13 times for 220 yards and three touchdowns.  It was the eighth highest single-game rushing performance in SOSU history.

“Wortham is a great kid and what can you say,” Richards said.  “He was a walk-on guy a year ago that we put on scholarship.  He just did a phenomenal job.  Phenomenal.”

Ladarius Abrams, the starter at tailback, had a pair of touchdown carries as well.

Not to be outdone, Southern Arkansas receiver Chris Terry had a breakout night.  In just his third start, the sophomore set a GAC single-game receiving record with 247 yards (195 came in the first half) and three receiving TDs.

SAU quarterback Tyler Sykora passed for 413 yards and four TDs, but threw three interceptions.  And turnovers in this contest were usually followed closely by points from the other team.

The Muleriders took an early 10-point lead through the first quarter, but the Savage Storm rallied with 21 straight points in the second.  The run was capped by a Chad Tucker interception returned for a score.

SOSU’s Chad Tucker returns an interception for a touchdown in the Savage Storm’s 56-50 win over Southern Arkansas.

Richards talked about how his staff had dealt with the possibility of getting down early.

“That’s what you have to do and that’s what they did.”

After each team scored again, Chris Terry hauled one of his scores, a 63-yarder to make the game close again at 28-23 going into intermission.

Both teams scored four TDs in the second half, keeping the fanbases and coaches on the edge of their seats and adrenaline levels high.

“That’s why people love football,” Richards said.  “It’s probably a coach-killer in a lot of ways, how it went back and forth.  It’s a crazy game.”

Special teams also played a part and Savage Storm got the better of the Muleriders.

Punter Jared Heim booted it nine times for SOSU averaging 49.6 yards per punt with a long of 63 and placed two inside the 20.  One of the punts was high and possibly lost in the lights, then subsequently fumbled by SAU deep in its own territory.

“Jared’s growing up,” Richards said.  “We had good snaps and good protection and so he was just focusing on catching the ball and punting.  With the exception of the last one on the night, he was booming them all night long.”

Sophomore quarterback Nick Sioson was 26-of-45 passing with two touchdowns and an interception for the Storm.

And senior receiver Anthony Foster had eight receptions for 113 yards and a score.

Southeastern travels to Arkansas-Monticello next Saturday to take on the Boll Weevils.  Kickoff is set for 6 p.m.