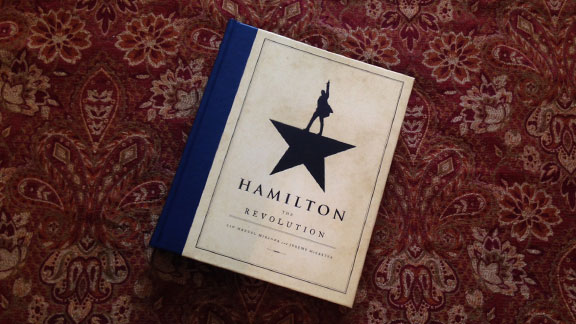 The 2015-2016 college athletic year has wrapped up in Oklahoma. OklahomaSports.Net takes a look back over the past year through the perspective of the lyrics of the nation’s most popular musical and during this time: Hamilton. Look around, look around, how lucky we are to be watching sports in Oklahoma.

The Southwestern volleyball team was just that. Having only one senior on the squad, the young Lady Dawgs will be back next year, but showed a tenacity in 2015 of a team that wanted to get it done. SWOSU put together a winning season for the first time with a program-high 22 wins, topping its former best win total by nine, and won the GAC Tournament and advanced to the NCAA Tournament, also for the first time.

Here comes the General. Rise Up!

Buddy HIeld decided to stay at Oklahoma for his senior to put himself in a better position for the NBA the next year. The Sooners benefitted greatly from it. In fact, even opponents recognized his greatness when Oklahoma came to town. After a three-overtime 109-106 loss at Kansas, in which Hield had a career-high 46 points, along with eight reoubnds and seven assists, even the KU faithful stuck around to give him a standing ovation following his postgame remarks on the court.

Or in this case, the “Sky”-ler sisters. Eliza. Angelica. And Peggie.
We’ll let them decide which is which. These girls were sky-ing on the court to help their teams. Barbara Jackson led UCO to a 31-win season with 427 kills at 3.81 per set. Laura Milos had 19 games with 20-plus kills for ORU and two with more than 30. And Carly Zak is now the all-time leader in kills for a career and still has her senior season to go in ’16.

Not throwing away his shot

With 4.4 seconds remaining in overtime of the NAIA men’s basketball national championship game, Mid-America Christian’s Malcolm Mann took the ball the length of the court, but did not throw away his shot. He did lose control of the ball for a fraction of a second, but regained it quickly to put in a jumper off the glass and the rim to give his team a 100-99 victory and the Evangels’ first NAIA title.

I’m wiling to wait for it

The Saints had to do just that – wait for it. Hillsdale Baptist (now known as Randell Univeristy) took down the NCCAA’s No. 1 team in 2015, but couldn’t complete the playoff run for the national title. Hillsdale waited through a long, but successful season to get another shot in the 2016 playoffs. The wait included five extra minutes of game time as the top-seeded Saints were taken to overtime in the championship game, but won it 97-84 over Grace Bible, and captured the school’s first outright Division II national championship.

Oklahoma’s Paige Parker and Oklahoma City’s Georgia Wall went non-stop during their teams’ respective playoff runs which both resulted in national championships. With 36 innings pitched in the Division I WCWS, Parker was responsible for all five OU wins. Parker, a first team All-American, finished the year at 38-3, tying an OU record for wins in a season. Wall went 6-1 in the NAIA World Series, and gave up only one run in the loss, and only eight in seven games. Wall, the Tournament MVP, pitched 46 innings and struck out 21.
Why do you pitch like you’re running out of time? Pitch day and night like it’s going out of style? How do you pitch like you need it to survive?
The girls are Non-Stop.

History has its eyes on you

Phil McSpadden just keeps on winning. The Oklahoma City University softball coach was named the NAIA National Coach of the Year for the ninth time, matching the number of national championships he has led the stars to in his 29 years at the school. He has a record of 1,525-364 and guided OCU to 65 wins and NAIA title in 2016. McSpadden is a member of four Halls of Fame and has established a mark around which future history will be defined.

Back in February, every time Oklahoma Christian’s John Moon took a shot against Oklahoma Panhandle, he connected. Click-Boom! Then it happened. 20 shots attempted, 20 shots made. Click-Boom. 50 points total on the night. And his 100 percent shooting performance tied a three-decades old Division II record. Click-Boom.

UCO running back Jake Gandara doesn’t have to ask that question. He knows the answer and it’s a great thing for his team. When Gandara suffered a season-ending injury in the first game of the year, Clay McKenzie was able to step right up and fill the void. McKenzie rushed for 1,499 yards and had seven straight 100-yard games. And this means the backfield should be loaded for the Bronchos when both return in 2016.

It’s not a moment, it’s the movement

OU became the first school to win both the women’s and men’s gymnastics national titles in the same year. For the women, it was the second crown. For the men, it was title No. 10. And Oklahoma men’s gymnastics coach Mark Williams has been named to be the head coach of Team USA in the Rio Olympics later this year.

I wanna build something that’s gonna outlive me

Corey Ayala, J.C Hartzler, Robert Johnson, Travis Julien and Donald Moore are graduating out of the Rogers State basketball program before they get a chance to play in a Division II postseason game. But through the transition for the Hillcats out of the NAIA, the seniors did not simply let games go by. RSU won its first Heartland Conference regular season championship in 2016 with guts and determination. The season was capped by a 97-94 double-overtime victory over Dallas Baptist with a game-winning three-pointer by Moore with 2.1 seconds left. The 2016 seniors did their part to help the Hillcats move on to the next level.

In the room where it happened

Interesting topics were to be discussed at the Big 12 meetings in early June. And although some answers came out of the gathering – like the decision that there will be a football championship game in 2017 – other questions remain. How will the two teams in that game be determined.? Will there be divisions and a full round-robin schedule and how will the divisions be set up? Expansion??? And still a Longhorn Network, but no conference network. And then there was the ‘Baker Mayfield is not eligible in 2017’ day, followed by the ‘Baker Mayfield is eligible in 2017’ day. What happened during that 24 hours?
The art of the compromise – hold your nose and close your eyes. Still it would have been interesting to be in the room where it happened…

Dan Hays has recorded more wins at an Oklahoma university than any other coach in the state’s hoops history and is a member of the NAIA Hall of Fame. This season became the final of 38 seasons as a collegiate head coach. Hays led his teams to 724 wins over those years and Saturday, Feb. 27, 2016, was declared by the Oklahoma House of Representatives to be “Dan Hays Day” in the state.

Who tells your story?

While OklahomaSports.Net has no control of who lives or who dies or anything on that scale, we will tell your story. And we’ll always do our best to tell it right. For college sports in Oklahoma, OSN is your stop.
And we’re non-stop.