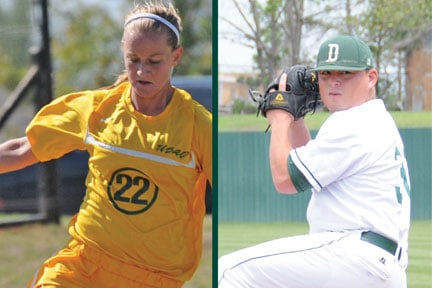 The University of Science and Arts of Oklahoma has a history of training student-athletes to become quality coaches, from now-retired USAO Men’s Basketball Coach and current Athletic Director Brisco McPherson, a member of the Drovers’ first basketball team, to 2012 graduates Annie Zoch and Kyle Moralez.

In all, USAO boasts dozens of coaches currently leading teams across the country, including head and assistant coaches at the high school and college levels and even the U.S. Deaf Men’s National Soccer Coach Dave Kunitz. Former USAO athletes coach various sports, including sports USAO no longer has — or never had.

Moralez, a four-year member of the USAO baseball team, was not ready to let go of his passion after school. He points to USAO as a reason why he chose to coach the game he played all his life.

“USAO gave me the opportunity not just to play baseball, but to get a quality education as well,” Moralez said. “I am thankful and blessed to be living the dream.”

Zoch, an assistant coach for Chickasha High School women’s soccer, credits USAO in preparing her for her career in coaching student-athletes.

“Playing at USAO prepared me in many ways. I learned so much about soccer and what to expect from the players,” Zoch said. “I can now take that and incorporate it in my coaching.”

Moralez echoes Zoch’s statements on the university’s impact on his career.

“When I blew out my arm my senior year in college, Coach Ross gave me the opportunity to be a graduate assistant by taking over the reins of the pitching staff,” Moralez said. “He prepared me so much with how the system ran. I learned so much not just from the coaches at USAO, but more importantly the university.”

Zoch began coaching to stay involved with the sport she loved playing all her life.

“I was interested in coaching because I love the sport and I absolutely love helping others achieve their goals,” she said. “After college I missed soccer terribly. I had to have it in my life in one way or another.”

“This was one of many dreams that I always wanted to do ever since I was a little kid, looking up to the greats such as [University of Texas Coach] Augie Garrido, [former USAO Coach] L.J. Powell, [USAO Coach] Mike Ross and my college football coach, Mike Wyatt,” Moralez said.

Even though the high school level of coaching consists of long days and great responsibility, the benefits far exceed the negatives. Moralez and Zoch each expressed their love and desire to teach these young athletes.

“I love everything about my job, from the time I walk in the school at 6:30 in the morning to when I leave home at night,” Moralez said. “I love my kids and the amount of dedication and hard work they give me day in and day out. The baseball and football fields are like another home for me; I am always there.”

And Zoch said her players aren’t the only ones learning.

“I love that I am able to help these young girls and encourage them to reach their full potential,” Zoch said. “I enjoy seeing them grow as people and as players. I learn a lot from them.”

Lessons from the Past

Being recent graduates, Moralez and Zoch remember what it’s like to be a high school student and know what precautions need to be taken in order for the players to succeed. As they will say, there is much more to teaching these young student-athletes than just the game itself.

“You have to teach them values and knowledge, such as being a good role model to your kids, promote the safety and health of all student-athletes at all times and establish time demands that acknowledge the primary importance of each student-athlete’s academic responsibilities,” Moralez said. “You must have good communication with your players and surroundings, encourage your athletes to experience high school in a well-rounded manner and support your athlete’s interests in pursuing their goals and dreams.”

Zoch sees one of her primary responsibilities is to set a good example to the players.

“The most important thing is for them to learn and enjoy it at the same time,” she said.  “It is also very important for me to be a good role model for these young ladies.”

Many student-athletes in high school look up to their coaches for advice, encouragement and leadership. It is superlatively important for these coaches to instill value and character in these young students as they grow up and move on in life.

Moralez remembers the days of being a student-athlete and the influence his coaches had on them. They now carry those lessons and apply it to their young athletes.

“Coach Powell and Coach Ross taught me so many things while playing for them during my 2008-2012 years,” Moralez said. “Not just about baseball, but life in general and to be successful. One thing I’ll always keep in mind about Coach Powell, he said to me, ‘God is first, other people are second and me third.’”

As a four-year starter for the Drovers, Zoch was named All-Sooner Athletic Conference three times and an NAIA Champion of Character in 2011. She also was awarded the Bill & Pat Smith Scholar-Athlete Award, given to one male and one female athlete at USAO each year. With all her accolades, Zoch knows benefits and outcomes of dedication and sweat.

“I would like to pass on the importance of hard work, no matter what kind of day you are having,” Zoch said. “Whether it be an off day or not, hard work will pay off and will always be recognized by me.”

Coaching as a Career

When asked whether they plan on pursuing coaching as a career, Zoch and Moralez were eager to express their dedication.

“Right now, I see no reason to stop coaching,” Zoch said. “I love coaching and I love soccer. I do it because I love it as long as I can do it I will.”

Moralez also said he plans to make coaching his career and hopes to someday coach at the college level.

They also have high standards and future expectations they will set out to accomplish as coaches. Zoch hopes to take her team to the state championship next season, and Moralez has set goals for his team as well as for himself as a coach.

“One, I want my kids [student-athletes] to be successful,” Moralez said. “Not just at the high school level, but I want them to be successful in college as well and graduate with degrees. Two, win a city, state and national championship. Three, be remembered as a great coach and teacher.”