Young brings much experience to Yukon, but is still learning every day 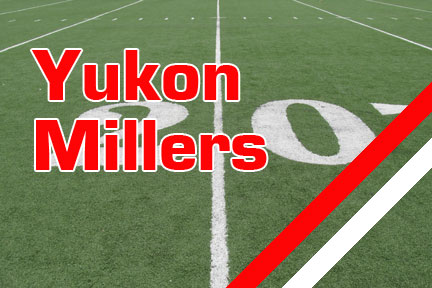 A new coaching era is beginning in Yukon, but the man in charge is not new to coaching football in Oklahoma.

Bill Young has taken the helm and will lead the Millers in 2014.

And he is pleased to be there.

“I’m really enjoying it,” Young said.  “It’s a lot of fun.  There is so much that I don’t know that I’m learning every day.

“And I have a great resource in our athletic director, David Fisher.  Without him, I’d be a lost ball in high weeds right now.”

That might sound funny considering that Young has been patrolling the sidelines for more than four and a half decades.  But this is the first time in those years that he is the head coach.

And he said he appreciates the experience.

“I had a tremendous time when I coached high school before at Carl Albert and Putnam West.  Right now, this is just a lot of fun.

“I’m really enjoying the camaraderie with the other coaches and the players and getting to know those players’ names and getting an offense and defense and special teams installed.  It’s an exciting time.”

Besides those two stops, he has also been the defensive coordinator at all three of Oklahoma’s NCAA Division I schools – Tulsa (1983-84), Oklahoma (1996-97) and Oklahoma State (2009-12).  There were also stops at Iowa State, Ohio State, Arizona State, Kansas, Miami (Fla.) and Wyoming.

Young also spent a year as the defensive line coach for the Detroit Lions.

He was officially hired at Yukon on May 7, but he has been acclimating himself to the situation for about a month.  He said, though, that it isn’t yet enough time for him to ascertain what the upcoming season might look like.

“I’m really not sure what to anticipate.

“I just know that we have a tremendous schedule and it’s going to be a big time challenge for us and that just inspires us to work harder and that’s what we’re going to do.”

As the lead man, it is the first opportunity for Young to put his unique stamp on a program.  He said he has an idea of what he would like his efforts to produce.

“I’m hoping that we are a very disciplined football team and that we’re going to have a tremendous attention to detail.  And that everybody is going to do things like we’re trying to coach them to do it.

Summer workouts have already begun and will continue following the Memorial Day break.