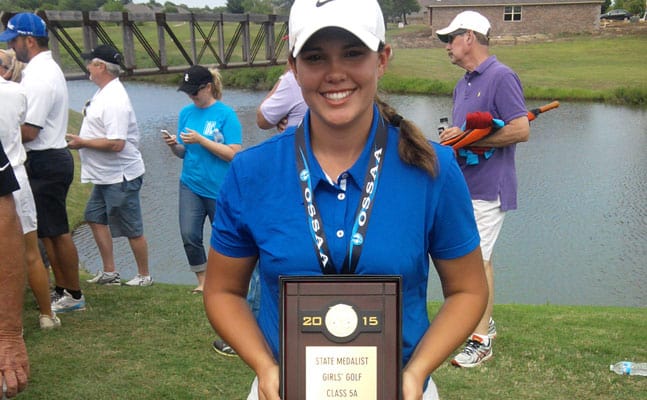 And for Sydney Youngblood, they never get old.

The junior from Durant separated herself from the crowd again this year, winning the 5A title with a two-round score of 141. The 17 strokes that distanced Youngblood from second place was the largest margin of victory at the state level this year.

She shot a 69 in the first round, the only sub-70 score recorded in any class at the state tournament this year, and was the only player to shoot under par.

Youngblood said she still looks at the accomplishments with excitement.

“It’s truly amazing I’m truly blessed. God’s given me a great talent and I’ve tried using it to better His kingdom and it’s been great.

She has already accepted an offer to play for OU after graduating high school in the Class of 2016, but not before she attempts claim four titles in four years. But that’s not something to dwell on right now.

“It’s crept into my mind a couple of times, but I don’t want to think too far into it now. I’ve still got another full year and I’ll keep working and keep pressing and we’ll see when it comes.”

Durant placed fourth in the tournament, well behind 5A champion Duncan, who earned the 11th girls golf title in school history.

Hilldale won its third straight championship in Class 4A, holding off rival Fort Gibson. Purcell won the 3A championship by 49 strokes.

Latta won a somewhat controversial title in 2A, after the tournament was called due to inclement weather and poor conditions after only one day. The Panthers were seven strokes ahead of previously unbeaten Mooreland at the end of the first round and the scores stood.