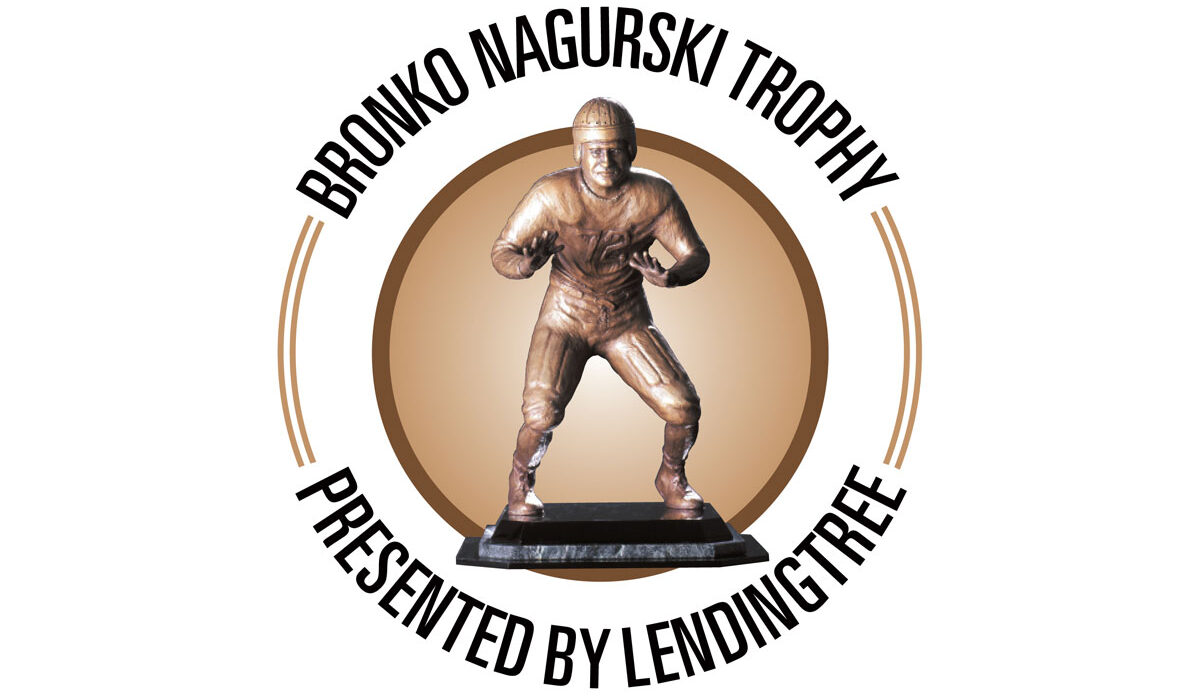 CHARLOTTE, N.C. – Tulsa linebacker Zaven Collins, a playmaker who helped seal two of his team’s six wins with interceptions and sparked the Golden Hurricane’s rise to the American Athletic Conference Championship Game, was named the recipient of the 2020 Bronko Nagurski Trophy as the college football’s national defensive player of the year by the Football Writers Association of America.

The FWAA All-America Committee selected Collins as this year’s Bronko Nagurski Trophy recipient after voting from the entire membership. The official presentation of the award by the FWAA and the Charlotte Touchdown Club, the award’s sponsor, will occur at a later date.

Collins, a 6-4, 260-pound junior from Hominy, Okla., was a unanimous choice as The American Defensive Player of the Year and the first player in league history to earn any unanimous player-of-the-year designation. He registered 53 tackles, 11.5 tackles for loss and four sacks in the regular season along with a fumble recovery and breaking up two passes. His four interceptions tied for fifth nationally among all players and tied for the national lead among linebackers with three others. Two of his takeaways were returned for touchdowns, including a highlight-reel 96-yard pick-six that was the game-winning score in overtime against Tulane. He is the first player from Tulsa to be named as the AAC’s Defensive Player of the Year.

“I’m honored and blessed to receive the Bronko Nagurski Trophy. It’s awe-inspiring to be mentioned in the same breath as Bronko Nagurski and the many great players who won this award before me,” Collins said. “I’m so thankful for this honor and for all the people who have put me in this position – my family, coaches, teammates and fan base. I can’t thank the coaching staff and my teammates enough. Coach G (Defensive Coordinator Joe Gillespie) and Coach Monty (Head Coach Philip Montgomery) have pushed me, and the absolute best teammates have helped make me better each day. I’m thrilled to represent my family, the city of Tulsa and The University of Tulsa in receiving the Bronko Nagurski Trophy.”

Collins was the Bronko Nagurski Trophy’s National Player of the Week for the weekend of Nov. 14 following another of his highlight interceptions in a 28-24 win over SMU. Collins corralled a pass at midfield with 1:29 left to thwart an SMU rally. It was the first time a Tulsa player had earned the weekly honor and Collins’ play helped post a second-half shutout of SMU – then the eighth-best total offense in the country – while Tulsa navigated its 21-point comeback that spurred its jaunt to the American Conference Championship Game.

His athleticism and range on the field is easy to spot. Collins, a 2018 FWAA Freshman All-America selection, was a quarterback in high school who happened to also play safety and linebacker. He was a four-year starter on both offense and defense, accounting for 7,140 all-purpose yards and 86 rushing and passing touchdowns in his high school career.

In four games against top-25 opponents this season (Oklahoma State, UCF, SMU and Cincinnati) Collins had 25 solo tackles among his 35 total stops and 10 TFL’s for minus-45 yards and four sacks. His other pick-six was a 38-yard touchdown at USF. He was The American’s Defensive Player of the Week four times following seven games.

“I’m absolutely thrilled to have a young man like Zaven Collins be recognized as the Bronko Nagurski winner,” Tulsa head coach Philip Montgomery said. “Being mentioned with the likes of former award-winners such as Warren Sapp and Charles Woodson and carrying on the name of the original tough guy himself, Bronko Nagurski, is a tremendous honor. He was a guy who played multiple positions and played the game at a high level with so much passion and grit. I think Zaven embodies what Bronko Nagurski and this award represent. To have the Bronko Nagurski Trophy winner come from our university, what an honor!

“Zaven Collins is what college football is all about. He does a great job in the classroom, does everything you ask of him on and off the field, is a great leader and a great teammate. He has always put his team in front of himself. Even with the recognition he has received this year, he’d be the first one to tell you he hasn’t done that by himself. It’s been with the help of a lot of his teammates pushing him, coaches pushing him and his dedication to being great. He’s done that same thing in the classroom. This is a young man who has poured a lot into being a true student-athlete and being a winner on both sides of that.”

No. 24 Tulsa is scheduled to take on Mississippi State in the Lockheed Martin Armed Forces Bowl in Fort Worth, Texas, on Dec. 31.

The American Conference has Temple linebacker Tyler Matakevich as a former winner in 2015 and Collins was the AAC’s fourth all-time finalist, the most recent being Houston tackle Ed Oliver in 2017.

The FWAA has chosen a National Defensive Player of the Year since 1993. In 1995, the FWAA named the award in honor of the legendary two-way player from the University of Minnesota. Nagurski dominated college football then became a star for professional football’s Chicago Bears in the 1930s. Bronislaw “Bronko” Nagurski is a charter member of both the College Football and Pro Football Halls of Fame.

The Bronko Nagurski Trophy is a member of the National College Football Awards Association (NCFAA), which encompasses the most prestigious awards in college football. Founded in 1997, the NCFAA and its 25 awards now boast over 800 recipients, dating to 1935. Visit ncfaa.org and @NCFAA on Twitter to learn more about the association.