Munteanu leads the way as Stillwater qualifies for state meet 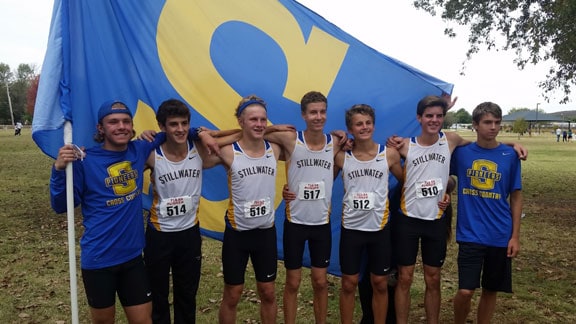 TULSA – Being an underdog can be nice.

Despite being ranked behind eight teams in its region, the Stillwater boys’ cross-country team qualified for the state meet at the Class 6A East Regional Championship at O’Brien Park in Tulsa on Saturday.

The top seven teams from each region advance to the state meet.

Although Stillwater did not win the regional championship, it received a confidence boost.

Sophomore Vlad Munteanu broke his personal best in the 5K for the fourth straight meet, placing fourth in 15:56 to beat his time from 11 days earlier at the Central Oklahoma Athletic Conference Championship by 48 seconds.

“We told him a while ago he was a 15-minute guy,” coach David Crynes said. “Running in the 15s for the first time changes your whole mindset; you don’t have that glass ceiling over you like you did in all your previous races.”

Similar to the last race, Crynes had Munteanu pace with Beyer, for Beyer is the top-ranked runner in Class 6A. Again, Munteanu kept up with him to the 2-mile mark before falling behind.

“I really felt like I could keep up with him, but I guess I couldn’t,” Munteanu said.

Munteanu dropped from third place to sixth place, but he did not give up.

“Once the hammer dropped, Vlad did a good job staying in the top five,” Crynes said. “He fought back two spots within the last 800 [meters] to finish fourth.”

Munteanu is the first Stillwater runner to break 16 minutes since former state champion Noah Gade in 2012. Munteanu’s goal is to break Gade’s school record of 15:30 before the end of his senior year, and he looks to be well on his way. Compared to Gade’s personal best of 16:29 as a sophomore, Munteanu is significantly faster at 15:56.

“It’s really unexpected, honestly,” Munteanu said. “I definitely think my junior year I can beat his time; I can drop at least another minute or so.”

The Pioneers had multiple impressive performances.

Senior Jay Ogle also ran a personal best at 16:53, placing 32nd. Ogle said breaking 17 minutes is a goal he has chased since he ran a 17:57 his freshman year at the state meet.

“I passed the 3-mile mark at 16:15, and I said there is no way I’m not breaking 17 right now,” Ogle said. “I was really mentally prepared because I all of a sudden had this overwhelming awareness of how this could be my last race in my competitive cross-country career, so I made a decision to leave it all out there.”

“We told them at the beginning of the season, ‘If you want to [make state] at the end, you have to run in the 17s,’ and that’s exactly what happened,” Crynes said.

Stillwater shifts its focus to the state meet, which takes place on Saturday, at Edmond Sante Fe High School. The boys’ goal is to finish in the top 10. Last year, the team finished 13th.

“It’s a tricky week because it’s a fun week; all of the hard training is done,” Crynes said. “We’re just going to enjoy it and ride the enthusiasm of finishing sixth. It’s just good to be off the bubble and going to state.”