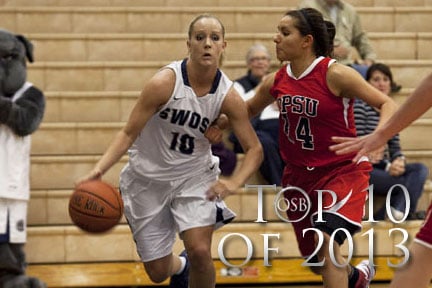 Three Division II teams made the NCAA Tournament in 2013: the Cameron men, the Northeastern State men and the Southwestern women.

Only SWOSU won a game in the Big Dance.

The Lady Dawgs earned an at-large bid following a runner-up finish in the GAC Tournament and went into the Central Region bracket as the No. 7 seed, matched with No. 2 seed Central Missouri, the No. 13 ranked team in the country.

Neither team shot well in the first half, with booth squads recording an identical 33.3 percent from the field.  Kimmi Sawatzky and TaNita Dewberry had four points each in an eight-point run through the final four minutes of the half to retake a lead the Lady Dawgs would not relinquish.  SWOSU was up 31-29 at the break.

Michelle Fisher led the way in the second half with eight of 10 points on a run that would put her team up by 15, 71-56.  But UCM came back to within three in the final minute.  Each team scored 42 points in the second half, underscoring how big the two-point halftime lead was.

It was the first appearance in the NCAA Tournament for Southwestern.  The program hadn’t competed in national postseason play since making a trip to semifinals of the NAIA National Tournament in the 1997-1998 season.

The Lady Dawgs fell in the next game to the region’s sixth seed Augustana (S.D.), 68-64, who went on to the Final Four.

Southwestern (24-7) not only had a season to remember, but did so with coaches who literally brought their families with them to the sidelines each night.

Head coach Kelsi Musick, named the GAC Coach of the Year for the second consecutive year, was eight months pregnant with her first child while coaching in the Tournament.  Not to be outdone, assistant coach Cophie Anderson was also seven months along in her pregnancy.