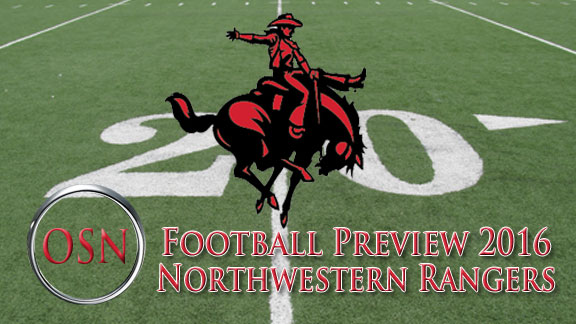 The 2015 campaign for the Rangers saw bright points and missed opportunities. Northwestern won its season opener in Matt Walter’s return to his alma mater. The Rangers led the Great American Conference in giveaways (32) – although the defensive takeaways countered and made the turnover margin for the season a zero – and the NWOSU defense, although strong, had to stay on the field too much. But the senior leadership for this year’s team could help lead it to its first winning season since 2010.

Reid Miller is back for his senior campaign and among returners is second in the GAC in passing yards from ’15 at 296.3 per game. Senior running backs Jarion Tudman and Charles Davis Jr. come back with much more potential than what the numbers for the Rangers’ rushing showed last season at less than 78 yards per game. Senior Arte Miura Jr. and sophomore Horatio Smith combined for nearly 1,000 yards receiving and should pick up more this season if Miller can continue to connect at a 60-plus percent rate.

Possibly the college defensive lineman in Oklahoma with the best chance to play at the next level is Joby Saint Fleur, who recorded 10.5 sacks last season. At 6-foot-5 and 245 pounds, he and fellow senior Theodis Williams, at 6-foot-6 and 250, bookend one of the most fierce defensive lines in the region. Junior linebacker Devin Payton led the team in tackles in ’15 with 119 and 6.5 for loss. Also back is senior Jordan Norris, the defensive back whose seven interceptions accounted for more than half of the Ranger total and was at the top of the GAC list (T-5th in D-II).

Will Hawkins, who had kicking and punting duties in 2015, has graduated and junior Andrew Lesnick may step in to fill at least the kicking role. Horatio Smith and sophomore Doc Harvey each were key on the return units as freshmen.

Reining in turnovers is likely the biggest key to making a turnaround in 2016, along with the Rangers performance in the red zone. NWOSU was last in the GAC in red zone in both scoring and in keeping opponents from scoring. With improvements in those spots, the personnel in Alva are equipped to make some noise in the GAC in 2016.