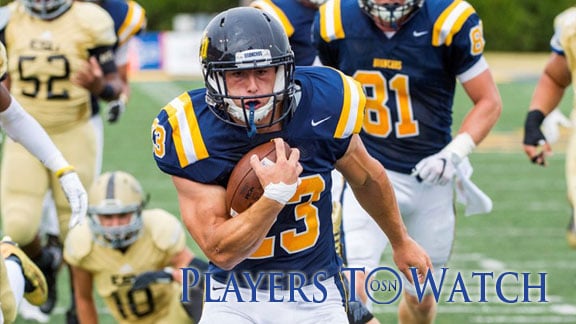 It’s time to start thinking football! The pieces are almost all together for the 2016 season. Here are 16 players that can have an impact this fall.

Mike’Quan Deane, Northeastern A&M, TE, sophomore
Deane was second on the team in 2015 in touchdown receptions. He will play his second season in Miami under new head coach Clay Patterson, a sure-handed receiver himself in college, and his opportunities to shine will be big.

Kaymon Farmer, Southeastern, WR, senior
The Savage Storm will be breaking in a new quarterback this season, but whoever comes out of the mix for the job will have a proven receiver to whom to throw. Farmer, a solid third-down back, led the team in receptions (61) in 2015. He possesses speed as well and can pick up a lot of ground after the catch.

Josh Atkinson, Tulsa, WR, senior
Atkinson brought in 76 receptions in 2015 and crossed the 1,000-yard mark with 1,071 receiving yards. Fellow 1,000-yard receiver from last season, Keyarris Garrett, has graduated and senior quarterback Dane Evans, who seems to be getting better each year, will be looking even more Atkinson’s way. The Golden Hurricane also get back another great receiver in senior Keevan Lucas (injured last year) and the football could flying all around Chapman Stadium. 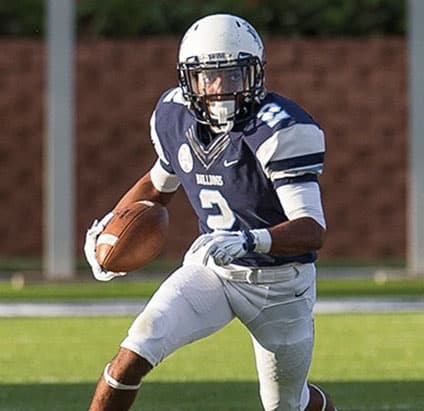 D.J. Jones, Southwestern, WR, senior
The senior is coming off an All-American year in which he led the team in receptions (54), receiving yards and nearing the 1,000-yard mark (903), kick return yards (533) and punt return yards (275). Two of his punt returns were for touchdowns, setting a new SWOSU record. And he was an All-GAC selection as both a receiver and a return specialist. Many keys remain in place from an offense that had ups and downs last year, but when it was good, it was really good, and Jones will be a factor.

Baker Mayfield, Oklahoma, QB, senior
The big news lately is that Mayfield gets to stick around in the Big 12 in 2017. But don’t forget about 2016. The Sooners’ offense produced nearly 7,000 yards and Mayfield threw for 3,700 and 36 touchdowns and put together a campaign worthy of Heisman recognition. He has an impressive backfield behind him (Semaje Perine and Joe Mixon), which should keep defenses on their heels at all times, allowing Mayfield the opportunity to shine again in ’16.

Clay McKenzie, Central, RB, junior
The 2015 All-OSN Player of the Year wasn’t even slated to start at the open of the season. But McKenzie made the most of his time, as he ran for 1,499 rushing yards and 19 rushing touchdowns. He also had a stretch of seven consecutive 100-yard games. With a healthy Jake Gandara returning to the UCO backfield, the ceiling for the kind of production the Bronchos can put up is very high.

Reid Miller, Northwestern, QB, senior
Miller distributed the ball so well in 2015 there almost weren’t enough players on offense to catch all those passes. In accumulating 3,259 passing yards, tops for a returning quarterback in the GAC, Miller had 11 receivers to record more than 100 receiving yards. Five seniors from last year’s offensive line two-deep list move on (including both Jonte Berry and Philip Romano, both at left guard), but Miller has a good group returning in front of him to keep him protected for the aerial attack.

David Moore, Wast Central, WR, senior
A Don Hansen All-American, the senior returns to try to break records he set in 2015. Moore became the first Tiger receiver to cross the 1,000-yard mark in a season (1,097) and also set the mark for single-season touchdown catches (13) and career TD receptions (25). He will likely be a focal point for defenses at the outset, because of not only his skill set, but the fact that, due to graduation, there will be a new starting QB, three new starting O-linemen and two new wideouts. So far, Moore has shown he’s up to it.

Darian Morris, Northeastern State, LB, senior
Morris leads the way of key returnees to the RiverHawk defense. The senior had at least five tackles in each in which he played last year and had the most tackles (93) of any player coming back. And Morris is a big part of getting the ball back to the offense. He had four interceptions, recovered four fumbles and forced two more fumbles in 2015.

Terrance Olds, Southern Nazarene, RB, junior
Olds helped to alleviate the pain of the Crimson Storm losing streak, leading the team to its first win in three years in the season finale with 160 yards on the ground and the game-winning touchdown. It is momentum that could carry into 2016 with a strong back like Olds to lead the way.

Evan Scott, Langston, LB, senior
Scott will bring leadership to the defense as one of the captains in 2016, which will be big for coach Quinton Morgan in his first full season at the helm. He led the team in tackles last year (65) and had three sacks with two interceptions as well.

Trey Seward, Bacone, QB
The Warriors played tough competition throughout the season last year, but managed two wins. If Seward can continue to help Bacone move down the field and continue to grow his passing numbers, the team could be looking good as the CSFL portion of the schedule comes around.

Joby Saint Fleur, Northwestern, DL, senior
It has felt like Saint Fleur has been a senior for a long time. The defensive end has looked like an NFL lineman in a college jersey for quite a while. In 2015, he notched 77 tackles, 17 tackle-for-loss with 10.5 sacks in 11 games. The Don Hansen All-American also forced three fumbles and recovered one. Rangers fans need to make it out to Ranger Field for all five home games to see him play his final games on Saturdays. He’ll be playing on Sundays next year.

Dez Stegall, Oklahoma Baptist, QB, junior
From the season opener (a tough overtime loss to Harding), Stegall showed opposing teams what he is capable of doing. But he’ll need to have a complete game each weekend for the results to show up more in the win column. Stegall is capable of picking up yards on the ground (two 100-yard games and nine rushing touchdowns last year) and through the air (connected on 13 of 15 passes against Harding), and putting the two areas together would be great for the Bison.

Shane Truelove, Oklahoma Panhandle, QB, junior
Truelove was responsible for 21 touchdowns last season (17 passing, four rushing) and will likely be called on that much more with the graduation of running back Chris McClendon. But he gets solid receivers in Devyn Williams and Andrew Hernandez back and opponents can’t forget that Truelove at 6-foot-2 and 220 pounds is a strong runner himself.

James Washington, Oklahoma State, WR, senior
If there was a big passing play that happened for the Cowboys in 2015, it regularly had James Washington on the receiving end of it. He had five 100-yard receiving games and four touchdown receptions that went at least 70 yards. A 1,000 yard receiver (1,087), Washington gets another season with Mason Rudolph at quarterback, a maturing offensive line and along side Marcell Ateman, who is also capable of greatness, and junior should continue to get national recognition as he helps his team to wins.