Ponca City gets big road win at No. 3 Alva 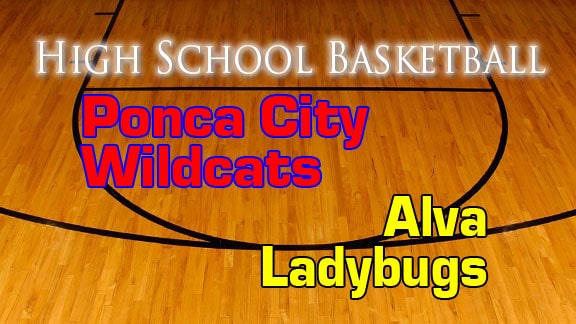 The Ladybugs of Alva faced off against the Lady Cats of Ponca City on Tuesday night in Alva, where the Lady Cats prevailed, 55-52.

The Ladybugs undefeated season came to an end at the hands of the Lady Cats, as Alva is now 4-1.

The game was up for grabs all night, with several lead changes, and even a last second buzzer-beater attempt that fell short to send the game into overtime.

Freshman point guard Baylee Fincher, led all Lady Cat scores with 16 points, including hitting back-to-back three pointers early on in the first quarter. Her ball handling skills and ability to drive to the hoop went unmatched.

Fincher, however, picked up her third personal foul early into the second quarter, earning her a spot on the bench until the second half.

The game opened up with senior Ladybug, Whitney Randall, laying the ball in for two points. These would be two of Randall’s game-high 27 points on the night. The Lady Cats didn’t have an answer for Randall’s combination of size and athleticism. Randall was dominating in post play all game, accounting for most of her 27 points.

Ponca City headed into the second quarter with a three-point lead. First quarter play was three-pointer heavy on both sides of the court, as well as both teams getting to the free throw line early and often.

With Fincher on the bench almost all of the second quarter, the Ladybugs took over. The difference makers for Alva were Randall and junior guard Tatum Rouse.

Randall was big for the Ladybugs in the post, gobbling up offensive rebounds and putting them in, and Rouse was shooting the lights out including back-to-back three’s early in the first quarter, as well as sinking two clutch free throws to tie the game at 23-23 moments before half. Randall scored another basket with seconds left to give the Ladybugs a 25-24 lead going into halftime.

The second half started with Alva’s Lexie Shafer opening up the scoring. The Ladybugs and Lady Cats would trade blows all quarter, mostly via the free throw. After three quarters of play the Ladybugs had a 40-36 lead.

The Lady Cats tied the game back up in the fourth quarter with four minutes left to play at 44 points a piece. As the game entered its final minute of play, Fincher hit two free throws to tie the game again at 50-all.

Ponca City decided to utilize the no shot clock rule in high school and held onto the ball until Alva committed a costly foul that sent the Lady Cats to the line.

After the Lady Cats sank the first shot, Fincher grabbed the rebound off the missed second shot and put it home to make it 53-50.

Randall then hit two free throws to put Alva back to within one at 53-52.

With seconds left on the clock, Alva got the ball back from Ponca City and looked to Randall for a last second miracle. Randall put up a three-ball from way beyond the arc at the buzzer but hit the rim.

Ponca City earned a huge road victory and moved to 2-2 on the year.