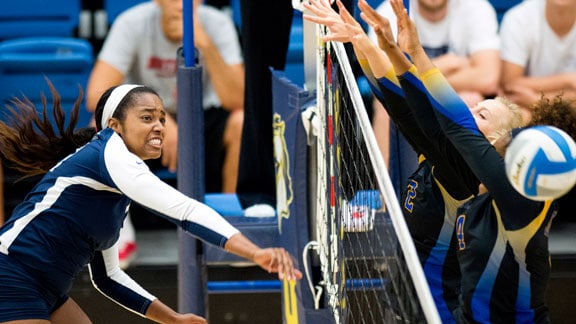 DURANT, Okla. – After finishing the regular season with a 28-3 record and their first conference championship since 1994, Central Oklahoma’s Barbara Jackson and Coach Edgar Miraku headline the inaugural All-OklahomaSports.net Volleyball team, which was announced on Monday.

The All-OSN Team is comprised of standouts from the NAIA and NCAA Division II institutions from around the state, with 10 different schools that have a player named to the team. Central Oklahoma led the way with three honorees on the team while Oklahoma Baptist and Southwestern had two apiece and seven other institutions each had a player recognized.

Jackson was named the Player of the Year after leading the Bronchos and ranking fourth in the MIAA with 360 kills (3.75 per set) with a .262 hitting percentage. She also totaled 247 digs, 43 blocks and 20 service aces and she had a team-high 17 kills for UCO on Saturday as they defeated Washburn 3-2 to claim their first conference championship since joining the MIAA in 2012.

Miraku earned Coach of the Year honors after directing the turnaround of Central Oklahoma volleyball the past four seasons. After going 13-18 in his first season at UCO, the Bronchos have put together back-to-back 28-win seasons and claimed a conference championship this season in the MIAA, one of the strongest volleyball league’s in NCAA Division II. His team is currently ranked seventh in the NCAA Central Region rankings, putting them in position to earn their first national tournament appearance since 2007. UCO is also the top seed in the upcoming MIAA Tournament and they will host No. 8-seed Emporia State on Tuesday night.