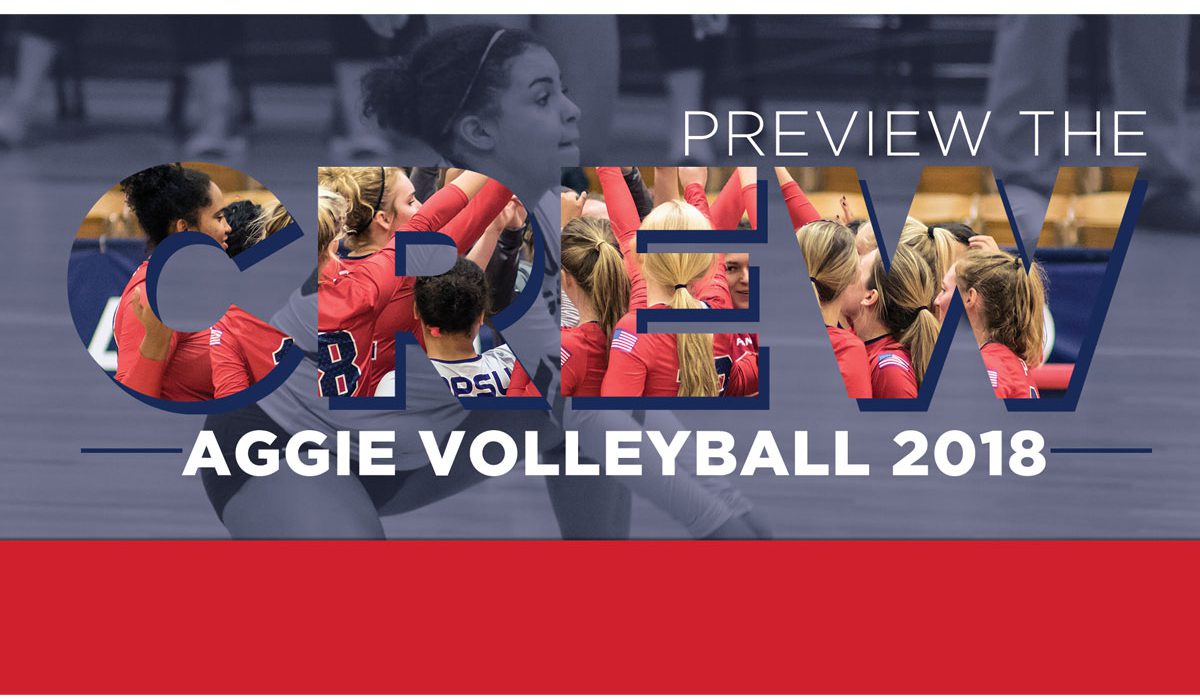 GOODWELL – The annual Aggie Challenge Tournament is set to take place this upcoming weekend on August 24-25 in Anchor D Arena at the Oscar Williams Field House. In the weeks leading up to the tournament, Head Coach Signe Coombs‘ primary focus has been to build conviction on the court and trust within the team.

“We are working to develop our team chemistry and implement all the skill sets we have introduced over the past few weeks,” Coombs said. The quick coaching turnaround hasn’t deterred the Lady Aggies, and the challenge presented has been one they are eager to overcome.

“We fully expect to compete every day and in every match,” continued Coombs.

In preparation for both the tournament and the upcoming season, assistant coach Shelby Bartley has been working with her athletes in the weight room to employ muscle-specific workouts that will transfer to the court. Bartley has expressed a focus on band work and shoulder physical therapy, while also devoting time to pre-hab for injury prevention.

“We know we are heading into a tough pre-season and tough conference but we will absolutely compete every day,” Coombs said.

The coaching duo have embraced an incredibly student-athlete oriented methodology, emboldening their players to exceed expectations on the court and in the classroom.

“Our main focus will always be our team,” Coombs said. “We want to develop and build a culture of not only successful volleyball players but successful student athletes.”

Bartley invoked an encouraging maxim for her athletes during training and practice with, ‘Empty your buckets.’

“Whatever percent they can give during practice that day, I tell them to empty their buckets and give everything they have, and I will give my one hundred percent every time,” Bartley said.

As the Lady Aggies continue to prep for their 2018 season, Coombs states they have been open minded, dedicated and eager.

“Whether they are a freshman or a senior our girls compete. They all push each other to make their teammates better and the team better as a whole.”

Though the construction of the starting lineup is still ongoing, the coaching staff has been impressed by each athlete’s aptitude to bring their own dimensions of ability to add to the success of the team.

As part of their dedication to commitment on and off the court, Coombs and Bartley have developed four ‘C’ pillars on which they base their foundation for the team: character, community, competition and classroom. Their team motto, “Passionate about the Process,” was derived from these ideals. “I constantly boost them toward trust in the coaches and our methods,” Bartley said.

“We strive for them to buy into this program and work toward the same goal,” Coombs said. “We are asking a lot of them but in coming together we are building accountability, embracing getting better mentally, physically and emotionally, and creating a culture we can move forward on.”

The Aggies Challenge Tournament will begin Friday, Aug. 24 and continue through Saturday, Aug. 25 as teams will compete in the round robin style tournament running from 9 a.m. to 7 p.m. each day. The Lady Aggies will take the court on Friday at 11 a.m. for a match against Fort Hays State and again at 7 p.m. to face the University of the Southwest.

On Saturday, the Aggies will face off against the University of Saint Thomas at 1 p.m. and their final game against Northwestern Oklahoma State will take place at 5 p.m. Fans can purchase tickets online at opsuaggies.com or at the door the day of the event. Those unable to attend in person may follow along online with free live video streaming of all tournament games, as well as free live stats of all games.