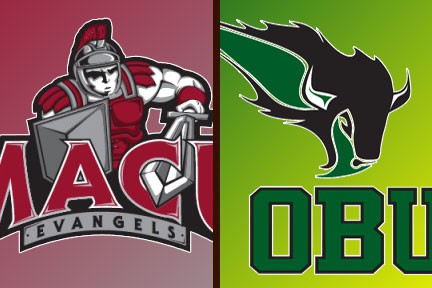 Shawnee – Tenth-ranked Oklahoma Baptist powered the ball inside for an 81-70 Sooner Athletic Conference men’s basketball Saturday in the Noble Complex.

Clinton Houston, Hayden Darst and Marques Anderson combined for 41 of the 81 points down low and led the Bison to a 42-27 performance in the rebounds column.

“Those guys were pretty good in there,” said OBU coach Doug Tolin. “We did a good job of getting them the ball and when we didn’t, I think all of them at one time or another went and got an offensive rebound and scored.”

Houston had a double-double with 16 points and 11 rebounds, leading the Bison in both categories.

“I was trying to be a force inside,” Houston said. “It was a great team effort. They play a lot of zone defense and we just needed to establish a force down low. We just crashed the boards.”

OBU trailed as late as the 12 minute mark of the first half but used an 8-2 run to take the lead for good, 24-19, with 9:31 left in the first half. Kameron Price and Houston had four points each in the flurry.

“That looked a lot like third-grade recess,” Tolin said of the last five minutes.

In addition to Houston’s 16 points, the Bison got 14 each from Darst and David Johnson, along with 11 each by Anderson and Adams. Johnson also had seven rebounds and two steals while Kendall Parks had a team-best four assists.

The Bison shot 52 percent from the field for the game.