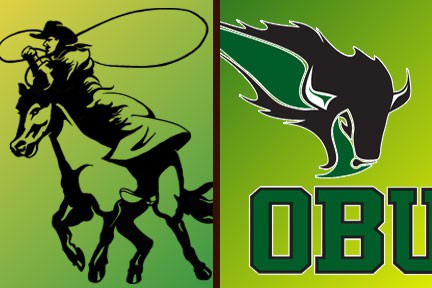 Oklahoma Baptist snapped a six-game losing slump with a 58-52 win over the University of Science and Arts of Oklahoma in Sooner Athletic Conference women’s basketball action in Shawnee Saturday.

Janell Beacham scored 17 points and Diamond Austin hauled in 10 rebounds to lead the Lady Bison to their first conference victory.

After giving up the first basket of the game, OBU went on a 14-0 run, getting six points from Beacham and three-pointers by Allie Brandenburg and Charity Fowler to build a 14-2 lead.

OBU led by as many as 15 points in the first half and took a 32-25 lead into the lockers at halftime.

The Lady Bison got a three-pointer from Bretlin Gabelmann to trigger a 9-0 run for the biggest OBU lead of the night, 49-31, with 12:03 left in the game.

OBU won despite not scoring a field goal in the final 12 minutes of the game. USAO knocked the lead down to 54-52 with 1:36 to play but the Drovers were 0-3 and had two turnovers on their final five possessions.

OBU held USAO to 29 percent shooting for the game and forced 21 turnovers. The Lady Bison got three assists each from Brandenburg, Fowler and Beacham while Aremi had four steals.

Oklahoma Baptist turned to its size advantage in a 61-53 win over the University of Science and Arts of Oklahoma Saturday in an NAIA Top 10 matchup in Shawnee.

Hayden Darst, Marques Anderson and Clinton Houston scored 34 points for No. 4 OBU with strong moves to the basket against a smaller Drover lineup and Darst help put the game away at the free throw line.

“Coach made a point to us to emphasize the inside game tonight. I was kind of worried about the free throws late in the game because I felt a little cold at the end. We needed to bounce back after the loss Thursday.”

OBU led by six minutes into the game but ninth-ranked USAO had replaced that with a 25-20 lead 10 minute later. The Bison, however, finished the half on a 9-2 run with four points by Houston, a three-pointer by Kameron Price and a basket by David Johnson to take a 29-27 lead into intermission.

The Drovers developed a 42-38 lead with 11 minutes left in the game, but the Bison came out of a timeout and got a basket by Anderson, a three-pointer by Cale Jackson, a driving layup from Kendall Parks and a basket in the paint by Desmond Griffin for a 47-42 lead off of a 9-0 run.

USAO got the lead down to three points with 6:02 left, but could get no closer as Johnson answered by stepping into a three-pointer. Up by four, the Bison got two free throws from Darst with 40 seconds left. Darst added the final nail on a layup with 20 seconds left for the final score, which matched the biggest lead of the game.

Darst led the Bison with 14 points, while Johnson, Anderson and Houston added 10 each. Anderson had a team-best eight rebounds as OBU won that category, 34-29.